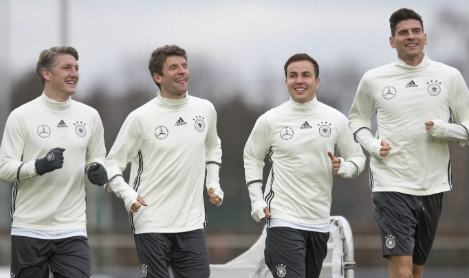 The world champions host Roy Hodgson's Three Lions on Saturday with a crowd of around 72,000 expected at Berlin's Olympic Stadium before the Germans play Italy four days later in Munich.

Security will be tight for both games in the wake of Tuesday's bomb attacks on Brussels' airport and metro system which killed 31 people.

“What is happening here in Europe at the moment is unusual,” said Müller.

“We feel that we are well protected, but of course anything can always happen.

“However, we are convinced the security forces are doing a good job.”

Germany were affected by the terror attacks last November in Paris having had to spend the night in the Stade de France after their 2-0 defeat to the French.

Then four days later, their home friendly against the Netherlands in Hanover was called off on police advice amidst fears of an attack.

Germany will be without captain and Manchester United star Bastian Schweinsteiger against both England and Italy after again tearing the medial ligament in his right knee having suffered the same injury in January.

The 31-year-old faces a race against time to be fit for the European championships, which start on June 10.

“It's bitter news for him and also for us,” added Müller.

“I hope, that he will be fit as soon as possible.

“Basti still has time before the European championships and it will be important to have our captain on board.”

Schweinsteiger's midfield partner Toni Kroos of Real Madrid is backing his captain to get himself fit for France.

“It's bitter for Basti, but it's not his first injury and I think we can compensate without him and he has often already made a comeback,” said Kroos.

Regardless of who plays against England and Italy, the world champions are looking forward to testing themselves against two contenders for the Euro 2016 title.

“These games against England and Italy will be a good test for us and we're looking forward to them,” said Müller.

SEE ALSO: Germany-England match to go ahead in Berlin