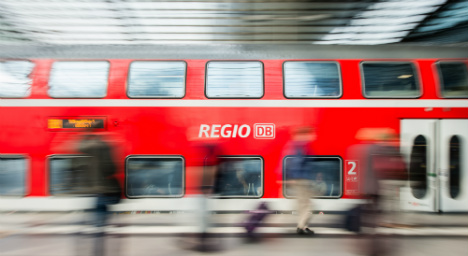 “There’s about as much chance of it [a terror attack] happening right now as there is of winning the lottery – so am I afraid? No,” said Hans G. a 61-year-old from Heidelberg who was waiting alone on platform two for the train to Frankfurt.

“If it does happen you can’t do anything about it, so how can I plan around it?” he asked. He did add though that a terror attack “could just as well happen here” as in Brussels.

Almost everyone The Local spoke to said that, despite reflecting somewhat on the possibility of a terror attack, they weren’t worried because they could not predict one or affect its outcome.

Andre A. a 36-year-old father, out for the day with his two young sons, said “I have absolutely no fear. Of course something like that could happen here too, but why should we chuck in our plans for a day out just because of what happened there?”

One greying policeman was ambling along at a slightly quickened pace on the shopping level, but it turned out he was responding to a signal from some tourists for help.

SEE ALSO: Germany-England match to go ahead in Berlin

Deutsche Bahn (German Rail) have apparently stepped into action in response to the attacks, though.

According to broadcaster N-tv they have banned journalists from filming or taking photographs in train station “until further notice.” Private individuals are not affected by the ban, though.

A  spokesperson was not able to give concrete reasons as to why this ban had been enforced.

Also at platform two Florian, a 19 year old student from Saxony-Anhalt conceded to The Local that he had “a bit of a weird feeling” but explained that he needed to get from his home town to the job he was doing in north-eastern Germany during the semester break.

Sylvia from Brandenburg, who described herself as coming from “the sticks”, also said there was no point worrying because an attack “could happen anywhere.”

But she felt that public reactions were misguided.

“Painting hearts on the ground or this kind of nonsense won’t help,” she said.

Asked what would, she replied “maybe we need a bit less freedom, more borders… a bit more dictatorship. But that’s just my opinion.”

An elderly lady travelling to Düsseldorf, after thinking for a while, concurred when asked if Germany needed to clamp down a bit on individual freedom.

“What do you mean by more control? Less data protection. Yes that certainly,” she said.

But was she scared?

“It enters your mind of course. But what can you do?”