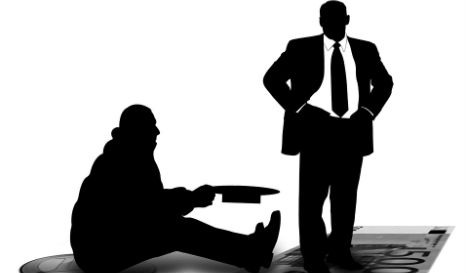 Hot on the heels of a study by the Kreditinstitut für Wideraufbau last week, another German institution is stoking the debate about inequality in the Bundesrepublik.

The Deutsche Bundesbank, the central bank of Germany and one of the most influential members of the European System of Central Banks, found that the lower half of all households owned just 2.5 percent of the country's assets, while the top 10 percent of households held 60 percent.

Despite heavy taxes in Germany, often complained about by the wealthier strata of society, other European economies seem to do a better job of redistribution.

The distribution of wealth between households – report 2013; Photo: European Commission

Figures from the previous year gave France a Gini score of 68 percent and Italy just 61 percent.

By those comparisons, the German economy begins to look more like the USA, which has a coefficient of 80 percent, according to Spiegel Online.

After conducting their first survey on German household finances in 2010, the central bank ran this latest study with 4,500 people between April and November of 2014.

It's difficult to estimate wealth distribution by simply taking an average net worth of all its inhabitants, because extreme outliers warp the figures, the report explains.

In Germany, for example, while the average net asset value lay at €214,000, only one-quarter of the German population actually enjoys such prosperity.

But looking at the median – the household which is wealthier than exactly half of others and poorer than the other half – gives a value of €60,400.

That's much closer to the level of wealth an average German household can call its own.

In fact, the disparity between the median and the average net wealth is used by experts as another gauge for financial inequality.

But methodology plays a significant part in the results:

But only 44 percent of Germans actually own their own home, while possessing this kind of property is much more common in other countries , says Spiegel Online.