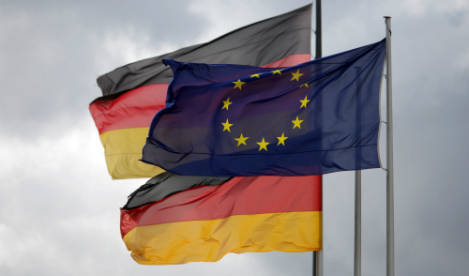 “Visibly installing German and European flags can offer an important and positive contribution to considering and identifying with the values of the Constitution and the European Community,” Christian Democratic Union (CDU) school policy spokeswoman Karin Prien told the Hamburger Abendblatt on Monday.

In the proposal tabled before the Hamburg city parliament, the CDU argues that the “symbolic act” of hanging the two flags at schools would bring up questions and lead to discussion about German values and democracy.

Flags should be accompanied with an “explanatory poster” that explains their symbolism, the proposal adds.

Other countries marked by high levels of immigration – such as the USA – have successfully used flags and national anthems to create “additional emotional identification” with the nation, it continues, which could help “fend off threats to our open society.”

Not your average flag

The CDU's is a controversial proposition in a society which still has a complicated relationship with its flag.

While most Germans are comfortable displaying the black, red and gold on special occasions like football matches, it's rarely used in a political context unless protocol demands it.

For many, pride in the national colours comes uncomfortably close to nationalism – something almost all Germans shrink away from – although the black, red and gold was not the flag of Germany in either World War in the 20th Century.

At celebrations of her 60th birthday Chancellor Angela Merkel typified this mindset when she refused to wave a German flag which an aide passed to her.

That's also why many viewers were uncomfortable when Alternative for Germany (AfD) spokesman Björn Höcke hung a miniature flag from his armchair during a talk show appearance in October 2015.

Alternative for Germany (AfD) spokesman Björn Höcke hangs a German national flag on his chair during an  appearance on the Günther Jauch talk show in October 2015. Photo: NDR/dpa

As the CDU are in opposition in Hamburg, currently governed by Social Democratic Party (SPD) mayor Olaf Scholz in coalition with the Green Party, the flag plan has no chance of becoming reality without agreement from left-wingers.

And that looked like a remote possibility on Monday afternoon.

“Schools mostly have flagpoles and the corresponding flags. They are used for certain national or school occasions,” Hamburg SPD representative Gerhard Lein told The Local via email.

Ordering or pressuring schools to fly flags daily would be “wrong and populist,” he went on.

CDU politicians ought to be pushing for a law governing immigration and integration at the federal level, Lein said.

“The idea of making a successful contribution to integration with flags outside Hamburg schools is simply absurd,” Hamburg Green Party interior policy spokeswoman Antje Möller told The Local in an emailed statement.

“What the children and young people learn in school about living well together in our society is much more decisive than a black, red and gold flag.”

Möller added that when it came to integrating refugees in German society, the city government had set up “orientation units” in accommodation centres and organized conversations with judges, the police, trades unions and others for the newcomers.