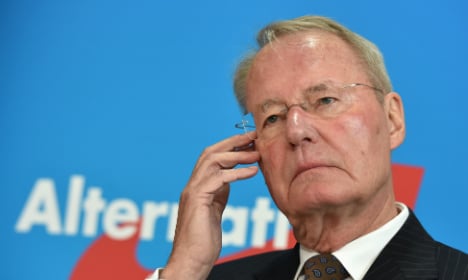 “We will avenge ourselves for every vote you cost the AfD! Bloodily!!!” the group calling itself the “AfD Army Faction” wrote to Hans-Olaf Henkel, a former head of the Federation of Germany Industry (BDI) elected to the Brussels parliament in 2014.

The name recalls the Red Army Faction far-left terrorist group active in the 1970s and 1980s, which carried out assassinations, kidnappings and bombings.

“Death to you and your Alfa cowards!” the typewritten letter seen by newspaper Welt am Sonntag continued. “Watch out for your family, we'll get them. The armed struggle has begun!”

A second letter went to Henkel's fellow MEP Bernd Kölmel, warning him to “piss off with your arsehole party or we'll clean up beginning with your kids”, while four more letters went to other former AfD leaders.

Henkel and Kölmel left AfD in July 2015 after the party was taken over from within by a right-wing populist wing led by figures such as Frauke Petry, now one of the party's most prominent figureheads.

Party founder Bernd Lucke, an economist who started the movement to fight German membership of the Euro single currency, left and founded a new party named Alfa, followed by Henkel and a number of other elected officials.

“Petry will be Chancellor of a new Germany and there will no longer be a place for you there. Watch out for your family, we'll get them,” the letter sent to Henkel concluded.

Henkel told Welt am Sonntag that he was used to criticism from party colleagues after his decades in politics.

“But what I have experienced in internal criticism, insults and threats from the far-right of the AfD has topped everything else,” he said.

Police told Welt am Sonntag that all six letters were processed at the mail center in Waiblingen, near Stuttgart, and that the area is now the focus of their investigation.