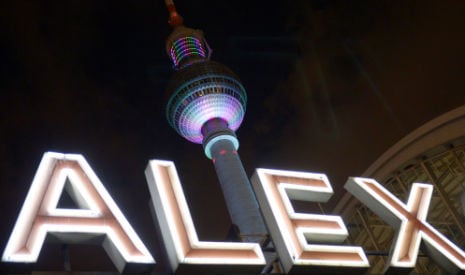 Crime has been rife for years at Alexanderplatz, Berlin's busiest public space and home to the German capital's world-famous TV tower. And despite increased police presence, officers have been unable to get a grip on the situation.

Figures released to Berlin city representative Tom Schreiber of the centre-left Social Democratic Party (SPD) show that the number of violent offences at Alex – as it's fondly known to Berliners – remained stuck at around 600 per year between 2011 and 2015.

“Although there are more officers and they are probably working overtime, I think the staff are overwhelmed with the situation,” Schreiber told The Local.

Ever since 20-year-old Johnny K. was beaten to death by 6 men in October 2012, an extra police team has been in place to watch over the tourist, shopping and travel nexus in the former East of the city.

But the report from the city government's Interior department shows that while crime was relatively low in early 2015, there were a total of 597 acts of violence by the end of the year.

The department registered 481 cases of assault, 62 instances of coercion and threats, 51 cases of robbery and three counts of the most serious crimes: rape, murder and homicide, some of them attempted.

“We don't want tourists to arrive in this city and then be welcomed by crime.”

The police department did not give a statement on why they haven't been able to curtail crime at the plaza when contacted by The Local.