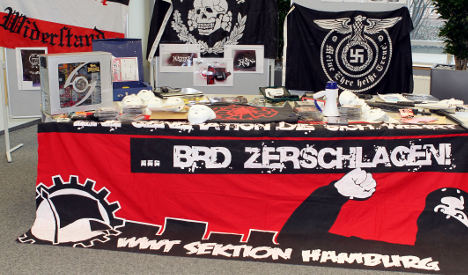 Police confiscated weapons, propaganda leaflets and data carriers in the raids against the far-right group, said Interior Minister Thomas de Maiziere, announcing the ban on the group whose German name is “Weisse Wölfe Terrorcrew” or WWT.

“This is a group of neo-Nazis who spew hate openly against our country, against our society, against people with different political opinions, against migrants and also against police,” the minister said.

“This group openly subscribes to the values of national socialism and wants a dictatorship based on that model.”

WWT had been active across Germany since 2014, according to the country's domestic intelligence agency.

Its members have been seen holding banners reading: “Achieve national socialism with all means.”

De Maiziere called the group's prohibition “a clear and strong sign against right-wing extremism and a further step against incitement of hate in Germany”.

“With today's ban I am sending this message: the security authorities are taking strong action against extremism – regardless of which (political) direction it is leaning and whether the group is big or small,” he said.

Founded in 2008 as a fan-club of the extreme right skinhead band Weisse Wölfe, the WWT subsequently developed into an outfit that carries out far-right violence.

Police had already carried out raids in 2009 against its members, and in 2012 federal prosecutors launched proceedings against it over charges that it was a terror organisation.

The accused were alleged then to have formed a so-called Werewolf Commando squad aimed at bringing down Germany's political system. But the case was dropped in October 2014 due to lack of evidence.