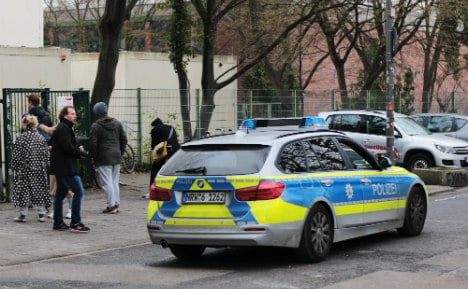 Police outside the Humboldt-Gymnasium. Photo: DPA

It was supposed to be the annual tussle between pupils at Cologne’s top high schools, where water pistols and flour bombs are deployed to attack rival school yards.

Instead on Monday evening, fireworks and glass bottles were thrown into the crowds of students and dangerous homemade weapons were used, leading to two pupils being brought to hospital with severe head injuries.

Pupils at the school say the police were slow to react despite the severity of the situation.

About 11 classes from different Cologne high schools descended on the Humboldt school with the intention of attacking it on Tuesday evening, police report.

According to the Cologne police, 60 pupils from the Humboldt-Gymnasium tried to defend their school property.

This so called “Abitur-Krieg” has been a tradition for a few years in the Rhineland city.

Young students, who are about to graduate, try to hang posters and stickers from their schools at other schools.

But normally the teenagers arm themselves with water pistols, water bombs and flour bombs to fight each other.

This year, things were different.

As well as the usual weapons, the attacking pupils threw firecrackers, eggs, sticks and even bottles.

Two 18-year-olds were taken to hospital after one had a skull fracture, and the other had a bone in his face smashed by a bottle.

Weapons seized by law enforcement included a self-made spear and a weapon made out of a bicycle-chain.

In a Facebook post, pupils from the Humboldt-Gymnasium accused their rivals from other schools of “applauding as some of us lay on the floor bleeding”.

The post described “a guy in the third row who thought it would be a good idea to throw huge firecrackers into the crowd” and a girl in a black jacket who threw glass bottles at other people.

According to Spiegel the rivalry between the Cologne high schools has been brewing for some time, leading to several police action over the days leading up to the fight.

Attacks on students outside school grounds with banned weapons have occurred, and last Friday teenagers even turned on police, hurling objects at them and threatening them.

The pupils also accuse the police of being slow to react.

“When we asked you for ambulances and help you replied by saying ‘we need to make a judgement on the situation’, even though it was clear to everyone that the situation had descended into anarchy.”

A parent of one of the pupils told Spiegel that “the police only intervened after my son and the other boy were injured. Before that they stood to the side and spoke through a megaphone even though it was clear that their mere presence was doing nothing to stop the attacks.”

Police say they arrived at the scene at around 10pm and put an end to the violence by 11pm. They have been investigating since Tuesday cases of aggravated bodily harm.

Criticism of the police response comes after Cologne authorities were accused of failing to act decisively enough when groups of young men attacked revellers at New Year’s celebrations in the city this year.

Police then apparently covered up the fact that the attacks had taken place publishing a report the following day that made no mention of them.

Over 1,000 police reports were filed since, many relating to sexual assault.

The police chief Wolfgang Albers lost his job in the wake of the scandal.