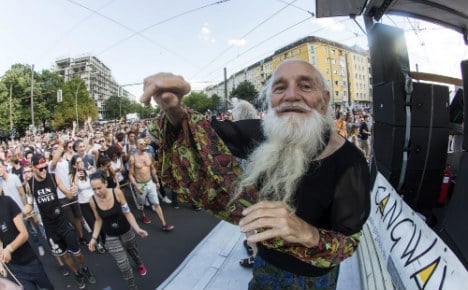 Bernhard Enste hasn't used retirement as an excuse to put his feet up.

Every weekend, the 67-year-old wanders the dark vaults of the Berlin techno scene alongside the many lost souls of the city – and he has made a name for himself as “Komet” Bernhard.

Known for his vigorous dance style and blowing soap bubbles, he can get onto the guest list at any club he wants – an unimaginable feat for even the best connected Berlin party-hopper.

“Berghain even elected me to be their ultimate dancer. They took a picture and everything – it was with black horses and a black carriage,” Enste told The Local.

He explained that he started clubbing late in life, saying that it chose him rather than vis-versa.

He also has words of wisdom for those trying to find the ultimate Berlin club.

“I would never say that there's a club that I would choose over all other clubs, the way some would choose a woman and then marry her – to me, it's all about how a specific night goes.” Bernhard Enste wasn't always a shining star on the firmament of the electronic music scene.

According to Der Tagesspiegel, Enste was born the son of Catholic family in Mainz and originally wanted to become a priest who converted Inuits to Christianity.

Soon, though, he renounced his faith, became a carpenter and only when he moved to Berlin at the age of 51 did he find another higher power – Berlin techno.

Though Berghain, Sisyphos and other legendary Berlin nightspots are dear to his heart, he now wants to enter a new dimension of dancing – the Burning Man festival in the USA, one of the world's most famous festivals that's been taking place in the Black Rock Desert of Nevada since 1986.

“[Going to Burning Man] is a desire that has spread in the Berlin music scene like an epidemic. I can't imagine anyone going: 'No, I don't want to go there',” Enste told The Local.

But the “Komet” can't do it all by himself. His crowdfunding campaign “Komet goes Burning Man” is calling on his followers to make his dream come true – a dream that he values at €18,500.

Most of it will go towards accommodation, food and tickets for him and his companion Till – the rest they want to use to turn their adventure into a documentary.

And the donations won't go without a favour in return, either:

For €10, “Komet” will bless donors with his “cosmic energies”. €5,000 will buy you a hand-carved wooden statue of the party icon. Being 67-years-old, Enste is pushing the age-boundaries of the capital's dancing cult – going to the US though, he is taking an even more impressive leap.

He has never been to America and has ordered a passport specially for it.

“I have never really been to an English-language area. This is probably going to be a new experience.”

But it won't only be foreign cultures and curious tongues raining on him – listening to American techno itself is a jump into the deep end.

“But if I was to go to America for a week and visit three or four clubs, I would understand that 'okay, this is faster, or this is more orderly'.”

The crowdfunding runs until the 30th of April, but to reach the stars, the Komet still has a long way to go.

“On TV you can see the ocean, or a city, or a travel experience or a desert, or people speaking English, but to experience that live is something that I wish for,” he reflects.

“That's why I would be happy for people to support my cause.”