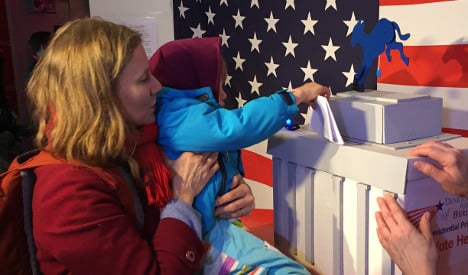 Americans voting in Berlin for the US global primary. Photo: Democrats Abroad Germany.

A fully stocked bar, live music, comedians, young hipsters mingling with grey-haired retirees – the scene on Sunday night was quite literally far from the long queues and austere atmosphere of a typical US primary polling spot.

Berlin’s Democrats Abroad hosted their third Global Primary on Sunday with more than 600 people in attendance – nearly twice as many as the 380 people who voted in 2008 when Barack Obama battled Hillary Clinton for the nomination.

“All over, at the other global primaries that have been going on worldwide, there has been in fact a larger turnout than in 2008,” Democrats Abroad Berlin Chair Gwendolyn Lynch told The Local.

“My opinion personally is that it does have something to do the political scene and the Republicans who are being presented to us. There’s a lot of crossover this year of people who usually vote Republican who are choosing to register with us today.”

Lynch told The Local on Monday that Bernie Sanders “definitely had more ballots cast in his favor than Hillary Clinton,” but organizers had not yet counted mail-in or online votes that are still coming in.

Unlike the Republican Party, the Democrats have allowed the party’s international branch to host a Global Primary since 2008, where expats can vote in-person with the group Democrats Abroad, which is given state-level recognition in the Democratic National Committee.

The group will send 13 delegates and eight super-delegates this year to the Democratic National Convention, which is more than the state of Wyoming's total of 18.

An estimated 8.7 million Americans live abroad – more than the population of Austria. Both parties tout elections like that of comedian Al Franken to the US Senate in 2008 as showing the impact of absentee and expat votes: Franken beat out his Republican opponent with the help of absentee ballots.

This year, Democrats Abroad voting centres were were set up in a dozen cities across Germany and around 120 places worldwide throughout last week.

Munich also had a record turnout this year with 35 percent more people than in 2008, according to Democrats Abroad Chair Quaide Williams.

Voters have until Tuesday to send in their ballots, so the final tally of votes will not be released until those have been collected, Williams told The Local.

Republican voters or those who miss the global primary can still vote in the state primaries where they last lived by mail-in or electronic ballot, depending on the state.

SEE ALSO: How to vote as an American expat

In Berlin, American expats started lining up almost an hour before voting started at 3pm to drop their ballots in a box in front of the American flag before grabbing a drink to enjoy the live entertainment. Voters came from all walks of life, old to young like actress Elena from Boston and Casper from Seattle.

“It’s really sad that more people don’t vote,” Casper told The Local. “Even though my one vote might seem small, it’s such an important election and there’s actually a choice.”

While voters wore buttons and hats for both Bernie Sanders and Clinton, many seemed to lean more in favour of Sanders, according to organizers like Lynch. At one point a speaker asked the crowd who they voted for and a louder cheer could be heard for the Vermont senator.

Sanders’ appeal wasn’t just with young voters at the primary, either – even German-American actress Doris Kahn, who turns 90 this year, told The Local that she voted “with her heart” for the long-time independent politician.

“It means a lot to me to vote because it’s my conviction, with all my heart,” Kahn said.

Kahn was born in Münster, spent her childhood in Berlin, but moved to New York in the 1950s and later started a family, eventually becoming a citizen.

“I love America, it’s still very important to me,” she said. “I always did what I should [and voted] when I lived there… I’m happy to be here and vote for America.”

Those who miss the global primary and members of the Republican party abroad can still vote in the state primary where they last lived – and in 24 states, where a parent is eligible to vote.

The organization Republicans Overseas isn't given the same standing within its party as Democrats Abroad, but works with expats to register to vote absentee.

“Everyone I know who can vote absentee has already done so – I certainly did,” said Republicans Overseas chairman Thomas Leiser, who is registered in Texas, to The Local.

Some states allow ballots to be sent by email, while others must be printed and sent by mail. While this process may not be as simple as slipping a ballot into a box, Leiser urged Republicans to “fulfill one's duty to vote”.

“In my case, every step you add is one more step that you might not take, but for voting, I would fulfill every requirement they might have, except for standing on my head.

“How difficult is it to stick it in an envelope and send it?” 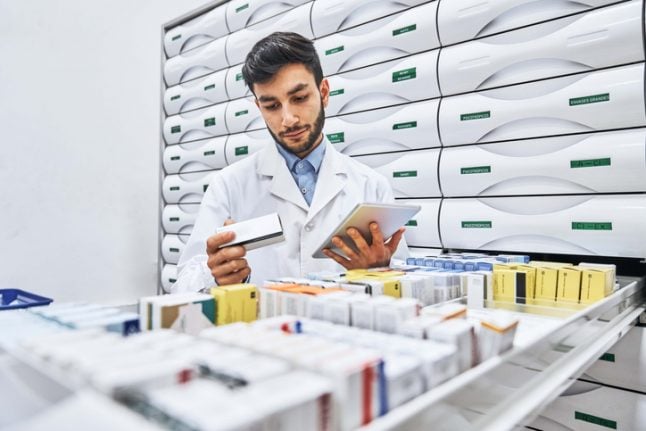 PARTNER CONTENT
Healthcare in Germany: when do you have to pay extra?