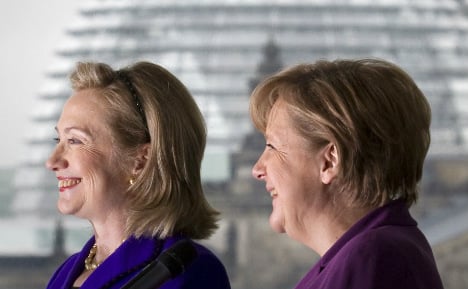 Bypassing the media to reach the public

When Merkel first ran for Germany’s top office in 2005 she was so uncomfortable in public she struggled to make eye contact when she said hello, the Süddeustche Zeitung observed in 2010.

Her answers to journalists were overly analytical and the media portrayed her as dull and frumpy.

But high office brought about a change in the former physicist, making her more relaxed and confident.

In campaigning in 2009 she spent more time touring the country doing question and answers with the public and less time speaking directly with the media.

She has cemented this relationship with the public through the warm hugs she smothered Germany’s World Cup-winning footballers in 2014 and smiling selfies with refugees.

When she appears in front of the media though business is strictly business. In the probable face-off between Clinton and Donald Trump in the US election, the ex-New York Senator could do worse than study how Merkel has dealt with male opponents with swollen egos.

Merkel famously still does her own shopping and her lack of pretence is seen as one of her strongest attributes. But it is also a weapon.

In the immediate aftermath of the 2005 election, Merkel and her opponent, the Social Democratic chancellor Gerhard Schröder, were interviewed on TV about the results.

Schröder, the consummate showman, boasted that he would remain chancellor and that his party would never do a deal with Merkel.

Merkel’s response was simple but deadly.

“Plain and simple – you did not win today. With a little time the Social Democrats will realise that,” she said with a smile.

Two months later Merkel was in power and the Social Democrats were her junior coalition partners.

Merkel hasn’t just been busy killing off political opponents – she has a killer instinct when it comes to her closest political allies too – and in her early days she used their sexism against them.

Helmut Kohl, the longest-serving Chancellor in the post-war era promoted Merkel through the ranks of the Christian Democratic Union (CDU) and patronisingly referred to her as his “Mädchen” (little girl).

But after Kohl lost the 1998 federal election and tangled the party in a campaign finance scandal, Merkel seized the chance to oust him, calling publicly for the CDU to ditch “the old warhorse.”

Kohl later bitterly commented to his biographer: “I brought in my killer. I put the snake on my arm.” Speaking to the New Yorker in 2014, ex-US ambassador to Germany John Kornblum stated: “If you cross her, you end up dead. There’s a whole list of alpha males who thought they would get her out of the way, and they’re all now in other walks of life”.

Will Clinton show the same ability to stick the knife in when the time is right?

At a time when the centre ground of American politics is crying out for a politician who can make bipartisan politics work again, Clinton would do well to renounce the ineffective Obama as a sign that politics on the Hill will start functioning again.

Reminding voters that it is only since she left her role as Secretary of State that the US has lost diplomatic battles against Moscow in Ukraine and Syria could also settle concerns on global security.

Bipartisanship is also something Clinton could learn a thing or two about from her forerunner in Berlin.

During over a decade in power Merkel has ruled alongside the centre-left Social Democrats, the conservative Christian Social Union and the free-marketeering Free Democratic Party.

In this time her governments have instituted a minimum wage, ended nuclear energy and taken in over a million refugees. At the same time she has followed a tight budgetary plan which led Germany to a record surplus in 2015.

Perhaps Merkel’s single greatest skill is her ability to reach out to her political opponents and build effective partnerships with them while maintaining a devoted following in her own ranks.

Quite how she does this is a mystery to almost all but herself. But any US politician who finds the answer is sure to be given a teary farewell eight years down the line.

Turning your biggest weakness into your strength Early in her career Merkel was extremely self-conscious when faced with cameras and never knew what to do with her hands. Eventually she developed the technique of joining her finger tips in front of her stomach.

The gesture has now become so synonymous with her that it has its own name – Germans refer to it as the Merkel-Raute (Rhombus).

During the 2013 elections the CDU unveiled a huge poster in central Berlin of Merkel doing the Raute with the message “Put Germany’s future in safe hands.”

Can Clinton also develop a way of turning her awkwardness on stage into an advantage? A quick call to the Kanzleramt – whose occupant developed the gesture “because of its symmetry” – could come in useful.

Leaving husbands in the background

Joachim Sauer isn’t a name that springs readily to the lips of even German political geeks. But the man is Merkel’s husband of almost two decades. He rarely appears in public and it seems that both are content for the situation to remain so.

Merkel has always remained highly professional in office. She rarely gives a genuine glimpse into her private life and sometimes gives the impression she is really married to her work.

It’s not so easy to shoo your husband back inside the house when he sat in the White House for eight years. But finding a strategy to hide Bill – especially given the bitter taste his deregulation of finance left in the mouths of many liberals – could be key to Hillary being seen not just as Clinton number two, but a politician with her own ideas and her own vision for America’s future.