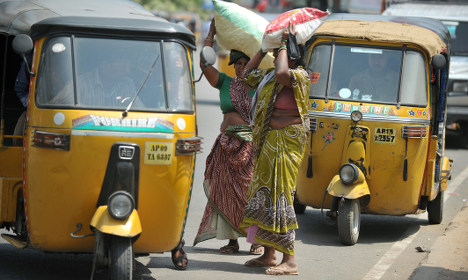 "She was finally helped by a man who was returning from work and saw her on the roadside." Photo: Noah Seelam/AFP

The woman, who approached police earlier this week, said that she was raped by the driver after leaving her hotel and getting lost in the city's busy commercial district on December 14th.

“We registered a case of rape and launched our investigation after the Delhi Commission for Women (DCW) approached us with the woman's complaint,” a senior Delhi police officer told AFP.

“So far, the complainant hasn't been able to clearly recall some key details about the entire incident but we are making all efforts to help her with it and take our investigation forward,” the officer added.

The victim told DCW that she didn't approach authorities immediately after the incident because she was scared, but later filed a complaint via email to the group.

“We first received her email complaint on February 5 but since she wasn't in Delhi at the time we couldn't take it forward to the police at the time,” Swati Maliwal, DCW chairman, told AFP.

Maliwal said that the auto-rickshaw driver “assaulted and raped her in the dark” after she walked out of her hotel at night and got lost.

“She was finally helped by a man who was returning from work and saw her on the roadside. She didn't tell him anything and he dropped her at her hotel,” Maliwal added.

The fatal gang rape of a young student on a bus in Delhi in 2012 led to an outpouring of anger over frightening levels of violence against women.

It also led to major reform of India's rape laws including speeding up of trials and hiking penalties for offenders, but high numbers of assaults persist.