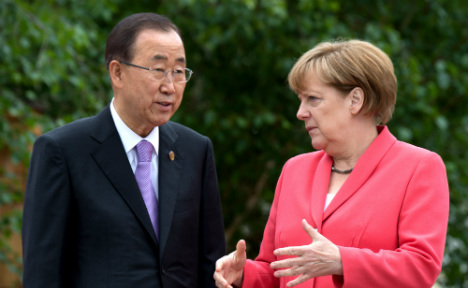 The secret files seen by the Süddeutsche Zeitung (SZ) show that the NSA listened in as Merkel had private conversations with other European heads of government and with the Secretary General of the United Nations, Ban Ki Moon.

One of the stolen documents seen by the SZ contains details of a meeting between Merkel and then French president Nikolas Sarkozy with the ex-Italian Prime Minister Silvio Berlusconi in 2011.

The document describes how at the meeting the French and German leaders put pressure on Berlusconi to enact financial reform.

Information from this meeting seems to have been lifted from Berlusconi’s advisor Valentino Valentini who was quoted directly in the report, describing the mood as “very unfriendly.”

In a conversation with Ban Ki Moon in 2008, Merkel discussed climate change and expressed hope that the EU could make progress on common environmental goals at a summit in Poland.

It is unclear how the NSA obtained the details of this conversation. But another document obtained by Wikileaks relating to the same time period shows that senior UN officials were seen as potential eavesdropping targets by the American spooks.

DON'T MISS: Two years after Snowden: what we know so far

But Germany dropped a probe into the alleged tapping of Merkel's mobile phone in June 2013 for what was described as “a lack of evidence.”

Meanwhile, MPs in the Bundestag (German parliament) are conducting their own inquiry into NSA spying and German security services' co-operation.

Its chairman has himself been the target of an apparent hacking attack.

In 2015 it also became known that German intelligence service the BND had provided information to the NSA which allowed them to spy on senior European politicians and businessmen.

Critics have charged the German government with staying silent on the NSA’s activities for fear of damaging its close relationship to Washington.

SEE ALSO: How the NSA may have tapped Merkel's phone