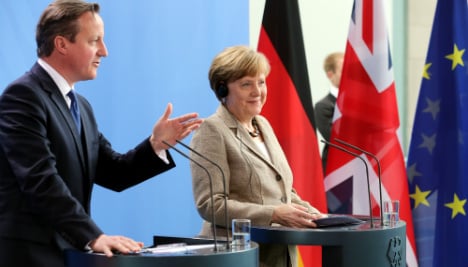 Davd Cameron (l) and Angela Merkel (r) with the flags of Germany, the UK and the EU. Photo: DPA

“We don't reject the important principle of freedom of movement for workers,” Sir Sebastian Wood said on ZDF's Morgenmagazin news show ahead of a European summit on Thursday and Friday where leaders hope to strike a deal.

Sir Sebastian insisted that Britain's reforms were not “blackmail” – as some viewers accused in tweets read out by the host – but would make the EU stronger.

“For us it's important to guarantee that the EU is more than a single-currency area, that there should be a place in the EU not only for countries like Germany that want further political integration, but also for countries like Great Britain that don't want any more,” he said.

“We think that the EU will be more dynamic, more competitive, and that there will be a better basis for the further integration of the Eurozone” if other countries agree, Sir Sebastian added.

And Prime Minister David Cameron appears to have convinced Chancellor Angela Merkel of that during six months of intense diplomacy all over Europe ahead of his referendum set for 2016 or 2017.

“These are not just about Britain's individual interests on some issues or questions, rather it's about several points that are justified and understandable,” Merkel told parliament, laying out her government's position on the eve of the EU meeting.

“Like (British Prime Minister) David Cameron, I believe that it is necessary for the EU to improve our competitiveness, transparency and (reduce) bureaucracy. Germany has shared these concerns for many years,” she said.

Even the controversial proposal to curb benefits to European Union migrants in Britain is “justified and understandable because the jurisdiction for each respective social system lies not in Brussels but in each individual member state,” she said.

“Therefore, it is only natural for every member state to be able to protect its social system against abuse.”

Britain is a natural ally for business-minded Germany in the EU to balance out France and southern Europe.

And the Chancellor would be loath to see the second-largest economy in the Union pack its bags and leave.

That's why she was clear that she would be backing the UK when addressing MPs.

“Our job is simply to provide the British government with the best arguments for remaining in a reformed EU,” she said.

But Cameron and Merkel will have an uphill battle to convince sceptical countries – especially eastern European members like Poland, who send many workers to the UK – that the plans will not discriminate against them.

The Prime Minister joked to allies last week that he had packed three shirts in expectation of talks going on through the night to strike a deal that will let him hold a vote sooner rather than later.