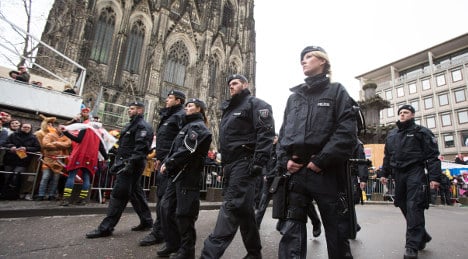 Police patrolling outside Cologne Cathedral on Rosenmontag, the high point of carnival, this week. Photo: DPA

“There is no evidence that we are dealing with structures of organized crime here,” Mathies said.

“We believe this was transmitted through social networks. A few people did in fact say, 'hey, we're going to Cologne, there's going to be a big party.”

Mathies did acknowledge that many of the alleged perpetrators were from countries where they might be familiar with “this behaviour, where women are hemmed in and then abused by a large number of men at once.”

“I must say that this phenomenon was not known to me in Germany before,” he said.

A particular challenge for the police has been the lack of quality video surveillance in the Cologne main train station, where many of the attacks happened.

“It's easier to look at a video and see: that guy's just taken a phone. Rather than: he's just touched a woman. These images are far from good. I believe that this must change a lot in the future,” Mathies said.

And he addressed directly the accusations that police had covered up details of the extent of the sexual assaults and the origins of those behind them – although critics will likely remain dissatisfied. “There is a concern that by naming the nationality, you contribute to the fact that at the moment everything is being lumped together,” Mathies said. “That hurts me. As a policeman, it's my job to protect people.”

“If the nationality is indispensable to understanding the crime, then [it should be named],” he continued. “But not in general.”

It was increasingly difficult for police not to name the nationalities of suspects to the media in the wake of the sexual assaults, Mathies added.

From the bottom to the top

Mathies is a former beat officer with experience going back to his time on a motorbike patrol in Cologne in the 1970s.

The former leader of the national security plan for the 2006 football World Cup, he's returned to the cathedral city after holding senior positions in the North Rhine-Westphalia state police organization.

But he entered office under a cloud, following the departure of his predecessor Wolfgang Albers over accusations that he played down the large numbers of sexual assaults against women around Cologne main train station on New Year's Eve.

More than 1,000 crime reports about that one night had landed on police desks by the end of January, including 433 sexual assaults.

State prosecutors in Cologne are investigating 44 men, largely of north African origin, with 10 of them in investigative custody.