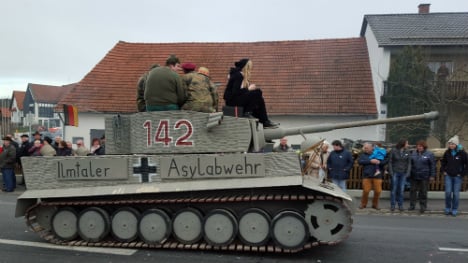 Shocked carnivalgoers at the Fasching celebration watched as the tank – in reality a car with a cardboard structure built on top of it – rolled through the town of Steinkirchen bei Pfaffenhofen.

As well as the anti-refugee slogans, the fake tank also bore the Balkenkreuz symbol seen on Nazi armoured vehicles.

After photos were published online, the OCV Steinkirchen association, which organizes the parade, faced a hail of criticism.

But they insisted that there were no far-right tendencies among their members – and that in fact some refugees were members of the organization themselves.

A police spokesman said that they did nothing to stop the Panzer rolling through the town, and that while they had suspected it might infringe the law on inciting religious hatred they didn't want to limit artistic freedom during the parade.

Photos taken by officers during the parade will be passed to state prosecutors for examination, they said.