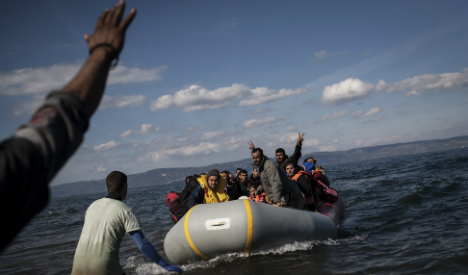 If Merkel gets her way, boat arrivals on Lesbos could be a thing of the past. Photo: DPA

The difference after the deal would be that arrivals in Europe would be “controlled, legal and organized by us,” Merkel told a press conference after meeting with Turkish Prime Minister Ahmet Davutoglu.

The EU has agreed to pay Turkey €3 billion in exchange for tightening up security at its sea and land borders with Europe, where refugees cross into Greece or Bulgaria.

Merkel added that any refugees arriving in Europe after the borders were tightened would be distributed fairly among member EU member states.

The deal been a tough sell for Turkey, which already has 2.5 million refugees within its borders, the vast majority of them from war-torn Syria.

And it's taken time for Europe to get the cash together from member states, some of whom believe in the plan more than others – which has meant Turkey hasn't been acting as urgently as countries like Austria, Sweden and Germany would like.

Now, the €3 billion is “available”, Merkel said, adding that “we need quick results – of course that's totally in the interest of the Turkish side.”

And there were no promises of further instalments after the first from the Chancellor.

“Now, I'd say, let's pay out the money first. When that's all done, we can talk again,” Merkel said.

Meanwhile, Merkel announced that Nato defence ministers would discuss the alliance joining in policing of the seas between Greece and Turkey at an upcoming meeting.

Attention has shifted back to the Mediterranean refugees after 35 people died attempting a crossing to the Greek island of Lesbos on Monday.

Merkel added that she had been “not just horrified, but outraged” by Russian bombing in the city of Aleppo, where Syrian government forces backed by Russian aircraft are engaged in a new offensive to wipe out opposition groups.

After a 1st airstrike kills a child north of #Aleppo, the jet hits rescuers once more. pic.twitter.com/NCwQXGLrke

She said that Germany and Turkey would push together in the United Nations Security Council (UNSC) for all countries to abide by the resolutions made on Syria.

On December 18th, Russia committed itself to a resolution that all attacks on civilian populations in Syria should be ended immediately.

Without all parties sticking to past agreements, Merkel said, any progress in hoped-for Syrian peace talks in Geneva was hard to imagine.

Since the latest offensive in Aleppo, opposition groups have refused to take part in diplomatic discussions, leaving tens of thousands to flee towards the Turkish border.

And Turkey doesn't have completely clean hands either.

Merkel said that she had challenged the Turkish government on human rights abuses, including its imprisonment of journalists.

But she said that “of course… every country has the right to act against terrorism” – despite Germany's hope for a reconciliation process between Turkey and its Kurdish Communist PKK rebels.