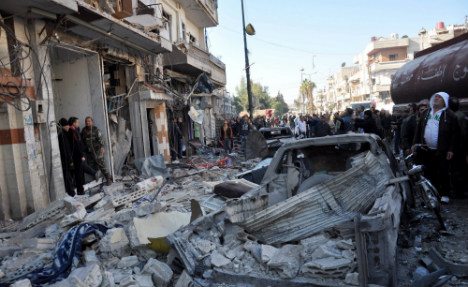 The aftermath of a suicide attack in Homs, Syria. Photo: DPA

Merkel made the commitment on the fringe of a one-day London conference, which the UN hopes will raise €8.3 billion for the estimated 10 million Syrians displaced from their homes since civil war broke out in 2011.

The Chancellor said Germany would donate the money over a three-year period and that €1.1 billion would be given in the course of 2016.

Germany co-organized that conference along with Britain, Norway, and Kuwait.

Before the conference – the fourth in a series – began, Britain and Norway had also already pledged a combined €2.9 billion by 2020, Reuters reports.

The Chancellor warned that if the conference fails, the EU will once agains have to reckon with a wave of refugees seeking shelter within its borders.

Merkel has often sharply criticized that fact that a lack of aid on the part of the international community had led the UN to drastically cut food rations to refugees in Syria’s neighbouring states.

Around 80 world leaders are in attendance.

The UN is seeking €7 billion to fund programmes including ensuring universal education for Syrian refugee children in host countries, the BBC reports.

A further €1.3 billion is being sought by host countries themselves to finance the costs of hosting refugee populations.

Of the 10 million displaced refugees. 6 million have been internally displaced while 4 million have left Syrian for the surrounding countries of Jordan Lebanon and Turkey, or have sought asylum in Europe or beyond.

The conference comes on the as UN-mediated peace talks between the Syrian government and opposition groups were suspended in Geneva within days of starting.