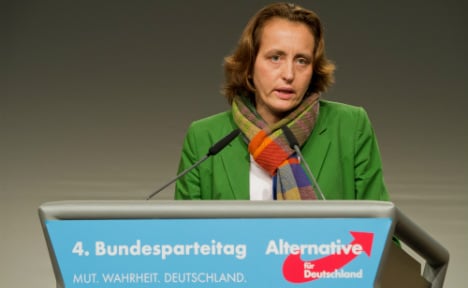 “Do you want women with children to be denied entry [into Germany] by armed force?” a Facebook commentator asked Beatrix von Storch, deputy leader of the AfD.

The trained lawyer, who is now an MEP, replied with a simple ‘yes’, the Süddeutsche Zeitung reports.

Von Storch later backtracked from this position that children could be shot at, while maintaining that women were fair targets.

“The use of weapons against children is rightly not permissible. Women unlike children responsible [for their actions],” she wrote on Facebook.

Shooting at women is permissible “within the narrow confines of what the law permits”, von Storch added.

With her original comment, von Storch had tried to support her party leader Frauke Petry who told a German newspaper on Saturday that “as a last resort” police should use weapons against refugees trying to cross illegally into Germany.

During an interview with the Mannheimer Morgen, Petry advocated the erection of border fences, arguing that Spain already had such measures in place.

“No policeman wants to shoot at a refugee. I don’t want it either,” said Petry. “But as a last resort weapons can be used.

“What is important is that it doesn’t come to that, and that we put a brake on the influx of refugees through an agreement with Austria and the at the EU’s outer borders.

‘Enemies of the rule of law’

The Social Democrats (SPD) and Green Party have responded to the latest outbursts from the AfD by calling for them to be put under observation by Germany’s intelligence services, Spiegel reports.

“In my opinion the AfD belongs in intelligence reports, not on the television,” SPD leader Sigmar Gabriel told tabloid Bild, referring to the ever more regular appearances of AfD leaders on political talk shows.

Volker Beck, MP for the Green party, told conservative broadsheet Die Welt that the AfD is “the enemy of the rule of law.”

However the other political parties in the Bundestag (German parliament) accused Gabriel of trying to politicize the intelligence services.

Jan Korte of Die Linke (the Left Party) described it as “typical Gabriel politicking”, while Wolfgang Bosbach of the Christian Democratic Union (CDU) said that it was up to the intelligence services whom they surveilled.

On Twitter the word Schießbefehl (order to fire) was trending on Monday morning, as critics accused the AfD of wanting to introduce an order for police which would be similar to that carried out by the border police of East Germany (GDR), where people who attempted to escape to the west were shot.

“Whoever wants to vote for the AfD is now saying they agree with an order to fire on refugees who come to Germany. Do you want that?” one commenter asked.

Another said “I believe the GDR’s Schießbefehl was legal too, at the time.”

Petry herself avoided using the word Schießbefehl in her interview, saying also that her proposal was nothing new but that the order to use a weapon “is [already] in our laws.”