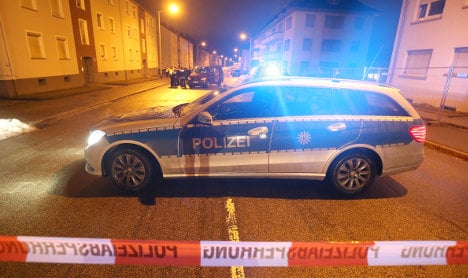 Police in Villingen-Schwenningen after a grenade was thrown at a refugee home. Photo: DPA:

The grenade was thrown onto the property of the refugee home in Villingen-Schwenningen.

The pin had been pulled out, but the grenade did not explode.

Police were able to quickly locate it and specialists performed a controlled explosion.

“This degree of violence is shocking. We all have to be thankful that no one was injured,” he said.

“Those responsible must be effectively investigated and punished – the rise in attacks of refugees, those helping them, and the police is alarming.”

Interior Minister Thoams de Maiziere, meanwhile, told broadcaster ARD that, while he understood people had concerns about refugees, “I draw the line at violence.”

This was the first attack on a refugee home in Villingen-Schwenningen, a town of 80,000 in the southern state of Baden-Württemberg.

But the town made national headlines earlier in the week when several hundred Germans with a Russian migration background protested against immigrants there.

The Russian migrants were angered by Russian state television reports that German authorities had allegedly sought to cover up the rape of a 13-year-old German-Russian girl in Berlin by three immigrants. Berlin has fought back against this report.

Attacks on refugee homes are an ever more regular feature of far-right criminality as Germany seeks to house and integrate more than one million asylum seekers who arrived in the country in 2015.

Earlier in January public broadcaster ARD reported that there had never been as many attacks on refugee homes as in 2015, which saw a huge rise in such criminality in comparison with the previous year.

Whereas in 2014, 199 acts of criminality against refugee home were recorded by the Federal Office of Criminal Investigations (BKA), in 2015 that number shot up to 924.

One of those cases went before a court in Hagen on Friday, where an ex-fireman is accused of attempted murder after setting fire to a refugee home in the west German town in October 2015.