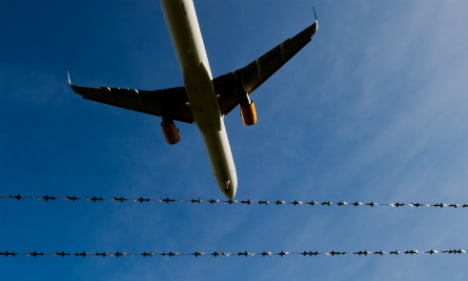 It is a grim picture. After years of waiting on an asylum application and exhausting their various appeal processes, an asylum seeker is put into a plane back to Africa.

But the country he lands in is not his own. His only attachment to it is that it is a country he travelled through to get to Europe.

According to refugee rights organization Pro Asyl, this is a scenario that results from Germany attaching “Readmission Agreements” to development aid to African countries.

“These agreements commit the African countries to readmitting their own citizens who have had asylum turned down by Germany, but it also allows them to readmit rejected asylum seekers from other countries, who travelled through these transit states,” Max Pichl of Pro Asyl told The Local.

This is in fact a Europe-wide practise, first implemented by Spain, he adds.

But this isn’t all. If Germany can’t deport someone because they can’t confirm his country of origin, they will pay a third country to “confirm” his nationality and issue him the necessary documentation, Pro Asyl alleges.

“It is difficult to say how many people it affects,” Pichl says. “The cases only come to light on an individual basis when someone who has been sent back to Africa reports it.”

But he says there is “a very long list of countries with whom Germany has such agreements.”

He concedes though that while many of the agreements have not been made publicly available, from what he knows “countries are obliged to take back migrants, but nothing more is specified.”

The Federal Office for Migration (BAMF) and refugees notes that it has 13 bilateral Readmission Agreements.

BAMF does not give data for how many people have been deported through transit countries, saying only that “these arrangements make it possible for foreigners to return or be returned via the contracting Member State without the need of a transit visa.”

Pro Asyl’s statement supports a report this week in Der Freitag, a left-wing newspaper, which documented how exactly this process takes place.

People who have been given deportation orders, but whose country of origin can’t be determined, are sent to mass meetings with delegates from embassies of countries it would be legally admissible to send them back to.

In 2014, 50 of these meetings took place with representatives from 18 different African countries and 720 asylum seekers were ordered to attend, meaning that at each around ten people were interviewed.

Germany pays the embassies of these countries for the time they take to perform this service.

But embassies receive a further sum if they grant the asylum seeker the appropriate documentation – a so-called “emergency travel certificate” – so that Germany can within days order the person to pack their bags and put them on a plane.

“These processes are far from serious,” Der Freitag comments, saying that they often take only a matter of minutes.

The embassies of certain countries are rewarded more than others for awarding migrants documentation. So for example Benin receives €300 for every “positive” identification, while Nigeria gets €250.

The Benin embassy also makes positive identification in around three quarters of cases, whereas Nigeria does so in one out of two.

As part of its research, Der Freitag reported the case of a man who claimed to come from Sierra Leone. but because he didn’t have the papers to prove it, he was sent to a test with the Nigerian embassy.

Despite denying he came from their country, the Nigerian officials gave him documentation on which it stated he had described himself as Nigerian.

Payments to the Nigerian embassy have now been stopped. But a Die Linke (the Left  party) politician told Der Freitag this is simply a move “to extract a bit of the smell of corruption.”

As German public mood has started to shift against the government's liberal stance towards refugees, more and more politicians have called for the speeding up of deportations.

In a new package of asylum regulations announced on Friday, the government vowed to speed up deportations to North Africa by assigning Tunisia, Algeria and Morocco as “countries of safe origin.”

But this only solves part of the problem. Many refugees arrive in Germany without any papers, either because they never had any, or because they threw them away before they arrived.

According to Der Freitag, a lack of official documentation is the biggest hindrance to deporting rejecting asylum seekers.

The German government has itself defended the policy of asking foreign embassies to conduct nationality checks.

Replying to a parliamentary question from Die Linke (the left party) in 2011 the government said that the tests were “often the only possibility to establish the nationality of the person to be deported.”