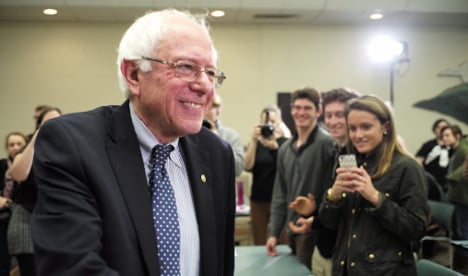 US Senator Sanders said on Monday that “in Scandinavia, and in Germany… The ideas that I am talking about are not radical ideas”.

But how German are Sanders' policy ideas, and where would he lie on the German political spectrum?

The Local decided to compare some of Sanders' platforms to what actually goes on in his idealized Bundesrepublik.

German reality: Given that a national minimum wage was only implemented last year in Germany, just the concept of a federal minimum wage is a bit radikal in Deutschland. Still, the German minimum wage is set at €8.50 – that would be about $9.25 in the US and thus $2 more an hour than the current wage standard.

The minimum was put into the 2013 coalition agreement by the Social Democratic Party. But it is not popular with pro-business politicians on the right of the coalition.

Bernie's proposal: Sanders wants to pass the Paycheck Fairness Act, which hopes to address the gender pay gap by punishing employers for retaliating against employees for sharing information about how much they're paid and allowing workers to sue for wage discrimination.

Estimates differ in the United States, but according to Pew Research Center, American women make 84 percent of what men do.

German reality: The issue of the gender pay gap is considered across party lines to be important in Germany – and it's definitely one that Germany hasn't solved: Women in Germany earn nearly 22 percent less than men per hour, making it one of the worst countries in the EU for equal pay.

The current coalition government of the conservative CDU and CSU parties with the centre-left SPD has agreed in principle to tackle the issue of the gender pay gap.

Minister for Family Affairs, Senior Citizens, Women and Youth Manuela Schwesig is been pushing for a wage transparency law that would allow female employees to check their salaries against those of male counterparts.

Photo: Students at the University of Cologne. Photo: DPA.

Bernie's proposal: Sanders wants to make public colleges and universities free in the US and even uses Germany as an example for why it's not such a “radical idea”.

German reality: Each state, or Bundesland, is responsible for funding its universities. In 2005, a federal court lifted a ban on tuition fees, allowing states to start charging fees – some up to €500 per semester. But this met with so much outrage from the public that the states started rolling back the fees, the last state doing so in 2014.

Students can still be asked to pay certain fees that go towards things like a public transportation pass and a student union, but these amount to just a few hundred euros, paling in comparison to the tens of thousands that American students pay.

Bernie's proposal: Sanders has various plans for how to promote LGBT rights, one of which is to pass a law that would prohibit public agencies from discriminating against potential foster or adoptive parents based on sexual orientation or gender identity.

German reality: While opinion polls might look otherwise, Germany actually lags behind many of its western European counterparts in this area. Same sex marriage is still not legal, and gay couples cannot adopt a child together.

The Social Democrats are in favour of gay marriage, as are smaller left-wing parties, the Greens and Die Linke. But Merkel remains opposed.

German reality: Under German law, workers are entitled to a minimum of 24 days paid leave per year – not including public holidays, of which there are a decent number.

For sick leave, German law states that after you've worked somewhere for at least four weeks, you may continue to receive full wages for up to six weeks if you are unable to work due to reasons beyond your control.

Women receive six weeks of paid maternity leave before giving birth and eight weeks after the baby is born. Both men and women can also take parental leave up until the child is three, but they are not paid by their employer. However, they are still guaranteed work with their employer afterwards and are paid a parental allowance by the state.

These laws are not contentious and have well-established support the main political parties in Germany.

Conclusion: Sanders would 'fit in well'

According to Professor Thomas Greven of the John F. Kennedy Institute in Berlin, Sanders is a good fit for the left of German mainstream politics.

“Bernie Sanders is right,” Greven told The Local. “In Germany, he'd fit in well with the workers' side of the SPD [Social Democratic Party].”

“Sanders is attempting to tie his concept of 'democratic socialism' to the European welfare states to avoid associations with Soviet socialism – which can be lethal in the American political discourse.”