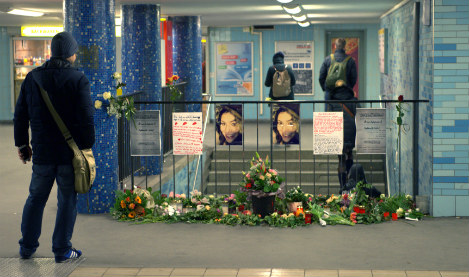 A man looks at the memorial to a 20-year-old pushed under a train in the Berlin U-Bahn last week. Russian media have seized on the case. Photo: DPA

Broadcaster Channel 5 reported on Tuesday that the man who shoved the 20-year-old to her death was a refugee from Iran.

The report attempts to draw a link between the perpetrator and migrants allegedly behind sexual assaults in Cologne and elsewhere in Germany on New Year's Eve.

“Another German citizen was the victim of yet another refugee,” the broadcaster's website alleges.

The problem? Prosecutors in Berlin have already released a large amount of information about Hamin E., the man who pushed the young woman – and he has lived his whole life in Germany.

Hamin, an Iranian national, was born in Germany, has always lived in Hamburg and has a history of violence, drug abuse and mental illness, prosecutors told The Local last week. The report from Channel 5 – part of the National Media Group, seen as close to the government of President Vladimir Putin – is just the latest in a series of stories questioning German authorities that have inflamed opinion among Russian-speaking Germans in recent days.

On Tuesday, Russian Foreign Minister Sergei Lavrov backed a TV news report alleging that a 13-year-old girl had been abducted and repeatedly raped by two migrants – a version of events the Berlin police say is simply wrong.

Protestations by German authorities haven't convinced Russian-Germans, who turned out in their thousands over the weekend to demonstrate about the case.

Alexander Clarkson, Lecturer in German and European Studies at King's College London, told The Local that the media focus on refugees in Germany is mainly aimed at Russians at home.

“By portraying Germany as a society in chaos because of migration, where Russian speakers are threatened, the Kremlin propaganda machinery projects the image to the Russian public that things are as bad 'over there' in the EU as in Russia,” Clarkson said.

“By claiming that everywhere is in crisis, the Kremlin can both discourage Russians from travelling to Germany in particular as well as deflect any responsibility for the economic and social crisis it finds itself in.”

Meanwhile, Dr Stefan Meister, Russia programme leader at the German Council on Foreign Relations, said that the report and Russian President Vladimir Putin's recent friendly interview in the Bild newspaper were signs of a double-pronged strategy inside Germany by the Russian government. “The Russian leadership has an interest in getting rid of the sanctions [imposed by the West after its illegal annexation of Crimea],” Meister said. “[The Bild interview] was a charm offensive aimed at the EU.”

Chancellor Angela Merkel, along with President Francois Hollande of France, has been at the core of a united EU front against Russia over its land-grab in Ukraine.

“[Putin] wants to say we're ready to talk and make compromises, the sharp rhetoric is gone.

“But Russia aims to weaken the EU, and the refugee crisis is an opportunity to increase internal political pressure on the German and EU governments,” Meister said.

“This isn't random, it's part of a bigger strategy to manipulate the information space in Germany and the EU, to disquiet the population.”

Not all Russian-Germans created equal

But while large numbers of Russian-speakers in Germany demonstrated over the alleged rape of Lisa F. over the weekend, Clarkson cautioned against lumping all Russian-Germans together.

But they often stand aloof from the mostly working-class people who joined the protests, the London-based academic argues.

Meanwhile, Ukrainians in Germany are alienated both by Russian anti-Ukrainian rhetoric and Germany's failure to stop Russia doing as it pleases in their home country.

The protests “demonstrate how failures by the German state to integrate migrants from Turkey, the former Yugoslavia and the post-Soviet space in the 1990s have left a bitter legacy,” Clarkson said.

“Perhaps that is the key lesson to be learned when faced with the challenges of integrating a new wave of migrants and refugees in 2016.”