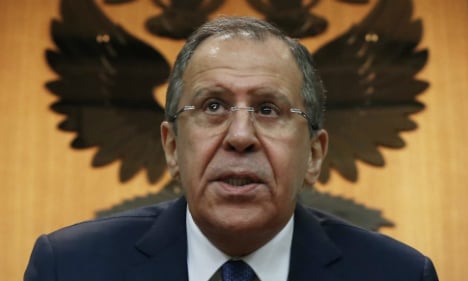 Russian Foreign Minister Sergei Lavrov accused Germany of “covering up reality in a politically correct manner for the sake of domestic politics” in his annual press conference on Tuesday, Spiegel Online reports.

He added that he hoped “there would be no repeat of cases like that with our Lisa”, saying “it's completely clear that she didn't disappear voluntarily for 30 hours.”

Lavrov was referring to reports in the Russian media that a 13-year-old girl from a Russian immigrant family was abducted in Berlin on January 11th by “Arab-looking men” and raped repeatedly over a 30-hour period.

Berlin police have furiously denied this version of events, saying that while the girl did go missing briefly, any sexual contact appears to have been consensual.

They say that they will give no more information out of respect for the girl and her family's privacy. Over the weekend thousands of Russian immigrants protested in various German cities over the incident.

In Berlin around 700 turned up to a demonstration outside Angela Merkel’s office in Berlin alongside anti-Islam group Pegida.

The crowd held banners with slogans such as “We're against the refugees” and “Lisa we're with you”, the Süddeutsche Zeitung reports.

The majority of Germany's Russian immigrant population – around 2 million of whom left the former Soviet Union after the end of the Cold War – live in the south of the country, and several thousand people took to the streets there, including a 500-person rally in front of a refugee home in Stuttgart.

Russian Germans are ethnic Germans who settled in eastern Europe and were separated from the Bundesrepublik (Federal Republic) in West Germany by the Iron Curtain after 1945.

When the Cold War ended they were offered German citizenship and they now make up the largest immigrant group in the country.

Outrage in the Russian community was sparked after Lisa's aunt told Russian television channel Perviy Kanal that “an Arabic looking man” kidnapped her on January 11th.

Then, along with two foreign looking accomplices “threw her on a bed” and raped her repeatedly over the course 30 hours, the aunt claimed.

Official voices of the Russian German community, however, kept their distance.

“We discouraged people from going to the protests,” Julia Iwakin from the Russian-German Youth Organization told the Süddeutsche Zeitung.

“We said they should wait for the investigation. You can’t hang this incident and the events of Cologne on all refugees.”

Iwakin explained though that lots of Russian-Germans had lost trust in the German media because of how the Ukraine crisis was reported and now watch Russian television instead.

“Many people found the reporting too one-sided and turned away from it,” she said, adding that the mistrust was compounded by the slowness of the German media to pick up on the Cologne sexual assaults.

The Russian government has faced repeated accusations in the Putin era of inciting Russian minority communities in other countries against their governments by means of Russian state television.

The Baltic nations of Latvia, Lithuania and Estonia have all previously complained about their large Russian minorities being “poisoned” against them by Kremlin-backed Russian language television.

Relations between Germany and Russian deteriorated sharply after Moscow annexed the Crimea from Ukraine in March 2014.

Germany corralled the EU into imposing tough sanctions on Russian business elite and has backed Kiev throughout the crisis.