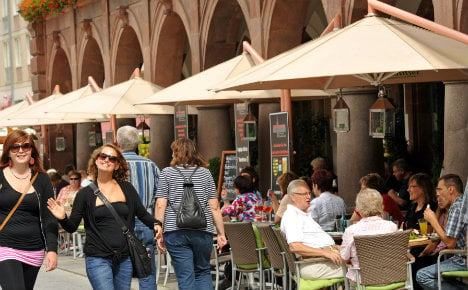 After reunification in 1990 East Germany may have thrown off the cold hand of communism, but that was just the beginning of its problems.

A collapsing economy and crumbling infrastructure pushed many young people to pack up their belongings and start a new life in the west.

Over the first two decades after the 1990 reunification the five states that make up former east Germany lost 1.8 million inhabitants.

But a study published on Tuesday by the Berlin Institute for Population and Development shows that this depressing trend – like a malfunctioning Trabi – has finally been put into reverse.

In 2012 close to 150,000 people moved to the “new states” from west Germany or abroad, meaning it was the first year when the former east experienced net migration, the new figures show.

But the story isn’t a wholly positive one. The study shows a huge disparity between urban and rural areas, with only 15 percent of local governments reporting net inward migration.

The growth is driven by the major cities of Leipzig, Dresden, Erfurt and Potsdam.

Leipzig in particular has won a reputation as an artistic utopia in recent years, wresting the mantle of 'Germany’s coolest city' from Berlin. During the communist era the once beautiful inner cities were left to crumble, as the government moved people into more modern high rises on the edge of the main cities.

In the 1990s many people decided to leave these somewhat soulless buildings behind and moved to the country to find a more balanced life, the report notes.

But as huge amounts of money have been poured into restoring the architectural gems of inner Erfurt, Dresden and Leipzig, they have once again become attractive places to live.

Add to that affordability, good universities and increasing job prospects for graduates, and the reasons become clear as to why these cities are now attracting young people from the pricier west and encouraging them to stay, the report argues.

But the flip side is that these revitalized metropolises are also attracting many young people from the east German countryside.

With few young people left, rural communities are struggling to raise finances to fund infrastructure projects that could make them attractive once more to young families.

The result is a vicious circle in which young people have less desire to stay and so communities have ever less money with which to rebuild themselves, the study notes.

The situation is now so desperate that even people of retirement age are starting to leave rural areas so they have better access to healthcare.

The report recommends that taking in refugees could be an answer to this problem. Not only would this inject youth into aging populations but rural regions would also provide refugees with smoother integration than large anonymous cities, the report's authors argue,