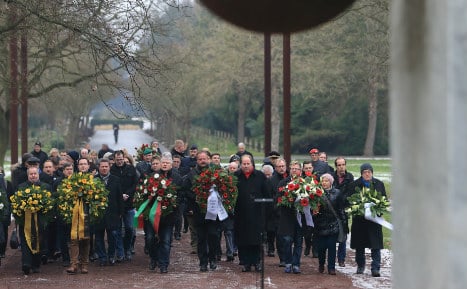 A memorial service for the victims of Allied bombing in Magdeburg. Photo: DPA

The group were on their way home from a march commemorating the 71st anniversary of the British bombing of Magdeburg, now capital of the federal state of Saxony-Anhalt, on January 16th 1945, which left large parts of the town destroyed.

Commemorating the victims of Allied aerial bombardment in the Second World War is a sensitive topic in Germany, as the far-right often seek to politicize such anniversaries.

The men had attended a demo by far-right groups which gathered by around 240 people and were travelling home by train..

As they exited the train in Oschersleben a group of around two dozen people who police believe were from the far-left scene attacked them.

The assailants were masked and carried baseball bats and metal poles.

Six of the group were able to flee but the other four were all seriously beaten and needed to be brought to hospital.

A 34-year-old was taken in with life-threatening injuries and was immediately operated on.

Around 10,000 people had earlier turned up to a ”March for democracy” in the town which was intended as a counter-demonstration to the far-right one.

Smaller left-wing demos were also organized and on the previous night masked left-wing marchers had attacked police with stones and fireworks, leading to 15 arrests for bodily harm and disturbance of the peace, the Rheinische Post reports.