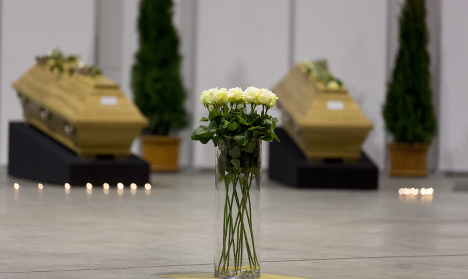 Coffins with the remains of ten German tourists killed in a suicide bomb attack in Istanbul, laid out in a hangar at Berlin's Tegel Airport. Photo: DPA

The bodies of those killed in Tuesday's attack were taken to Berlin's Tegel airport onboard a German army transport plane.

Relatives of the victims were waiting in a makeshift chapel set up in a hangar at the Berlin airport.

Another 17 people, mostly German tourists, were wounded in the attack in the historic heart of Istanbul, near the famed Blue Mosque and the Hagia Sophia, the towering former Byzantine church that is now a museum.

Seven suspects have been detained in connection with the attack, Interior Minister Efkan Ala said Thursday.

Turkish authorities have identified the suicide bomber as a 28-year-old Syrian who entered Turkey on January 5 posing as a refugee, with Prime Minister Ahmet Davutoglu saying the man was a member of IS.

Ankara has often been criticised by its Western allies for not doing enough to combat IS jihadists who have seized swathes of territory in neighbouring Syria as well as Iraq.

Turkey is currently hosting around 2.2 million refugees who have fled the fighting in Syria. Davutoglu warned against seeing all refugees as potential extremists, which he said would be playing into the hands of the “terrorists”.

Turkey was hit by three attacks blamed on IS in 2015, including a double suicide bombing in October in Ankara that killed 103 people, the country's worst-ever attack. All those attacks targeted pro-Kurdish groups, who are vehemently opposed to IS.

The attack on the German tourists, however, was the first time that foreign visitors have been targeted in Istanbul.