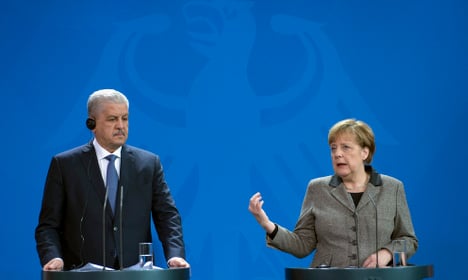 Alarmed by the spike in North African arrivals, German authorities want their countries of origin to help in their swift repatriations, in order to free up resources to deal with asylum seekers fleeing war and violence.

But the German authorities have in recent weeks flagged problems in expelling Algerians and Moroccans, saying their countries of origin were often unwilling to take them back because of missing identity documents.

“We have a repatriation agreement. That means, everything is regulated on paper. But in practice, we know that it remains problematic in some cases,” said government spokesman Steffen Seibert.

“That must be dealt with so that the agreement can be put into action.”

All foreigners who did not have residency rights in Germany are required to leave, including citizens of North Africa, he said. “And there we have to talk about how the repatriations can be carried out.”

Chancellor Angela Merkel raised the issue this week when Algeria's Abdelmalek Sellal visited, although the Algerian premier had sounded a note of caution, saying it was essential  to first “ensure that they really are Algerians”.

Under pressure over the same issue, Tunisia has also raised concerns about the true identity of potential deportees.

“There are asylum seekers in Europe who destroy their identity documents and once they are arrested by police, they pretend to be Tunisians even though they are not,” an official from the Tunisian foreign ministry said.

“The state has to ensure that the migrants are really Tunisians. Sometimes these checks take time,” he added.

The numbers of Algerian asylum seekers arriving in Germany rose from 847 in June to 2,296 in December, while those from Morocco jumped from 368 to 2,896, the interior ministry said.

The issue has taken on a new urgency following a shocking spate of sexual assaults against  women on New Year's Eve, which has been blamed on North African and other Arab migrants.

Cologne police said 652 complaints have been filed over the violence, including 331 relating to sexual violence.

Of 19 suspects identified by Cologne police so far, 14 are from Morocco or Algeria.