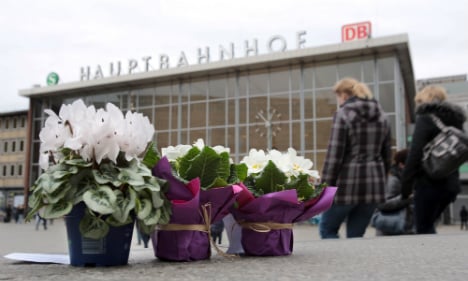 Broadcaster Westdeutsche Rundfunk (WDR) reported that videos from the main train station in the cathedral city – the scene of most of the sexual assaults – had been found on the two men's mobile phones.

According to WDR, the videos show violent confrontations and sexual assaults against women.

Officers found a note on one of the men containing Arabic-German translations for phrases including “nice breasts”, “I'll kill you” and “I want to have sex with you”.

Cologne police have not yet confirmed the report, but have said they are currently investigating 21 people in connection with the sexual assaults. They had received 121 crime reports by Thursday.

Meanwhile, the Federal Interior Ministry in Berlin revealed on Friday the nationalities of people encountered by federal police officers (responsible for security inside the train station) on New Year's Eve. They included nine Algerians, eight Moroccans, four Syrians, five Iranians, one Iraqi, one Serbian, and one US citizen.
There were 18 asylum seekers among the 31 people stopped by federal police, who also recorded three sexual assaults.

A police report dating from January 2nd and leaked to media on Thursday revealed that four men had been arrested, 11 taken into custody and 71 stopped for ID checks by police on New Year's Eve.

Two of the arrests on New Year's Eve were on suspicion of stealing bags.