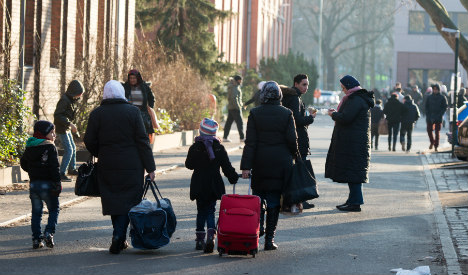 Refugees arriving outside the Berlin Office for Health and Social Affairs on December 31st. Photo: DPA

“In Germany, the arrival of 100,000 to a maximum 200,000 asylum seekers and war refugees a year would pose no problem,” Seehofer, who heads the Christian Social Union (CSU), the Bavarian sister party of Chancellor Angela Merkel's Christian Democrats (CDU), told Bild newspaper.

The CSU, which has been up in arms over Merkel's welcoming refugee policy, is calling for Germany to cap the number of asylum seekers it takes in.

“Limiting the number of migrants must be the main objective in 2016,” Seehofer said ahead of the CSU's annual conference this week in the Bavarian mountain resort of Wildbad Kreuth which Merkel and British Prime Minister David Cameron are scheduled to attend.

“This figure (of 200,000) is tolerable and, in that case, integration would also work properly. For me, anything above that is excessive,” he added, warning of up to 1.5 million arrivals in 2016 unless measures to check the migrant tide were taken.

Seehofer, fearing that he may be ousted by CSU party colleagues with tougher conservative credentials, has been sparring with the Chancellor for months over the number of refugees arriving in a bid to boost his support among hardliners.

But while all political parties agree that the number of refugees arriving must be reduced in 2016, there has so far been total rejection of a concrete maximum figure.

Merkel has so far categorically refused to set a limit. In her New Year's address she told Germans the influx was “an opportunity for tomorrow”.

“It is right that our asylum law contains neither a numbered limit nor a quota system,” said leading CDU MP Wolfgang Bosbach, although he allowed that Germany did not have “unlimited capacity to take people in or an unlimited power to integrate people into society and the labour market.

“Horst Seehofer can't even say how such an upper limit would function in practice. Would it be enforced with armed violence?” asked Thorsten Schäfer-Gümbel, deputy leader of Merkel's junior coalition partners the Social Democratic Party (SPD).