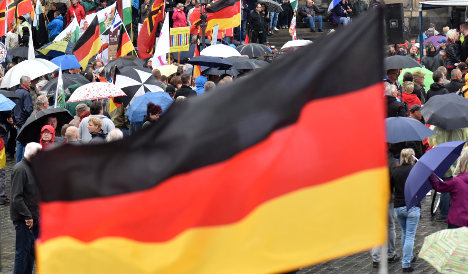 The song has been available to buy on Amazon since December 21st and has been among the top 100 best selling singles for four days.

German media picked up on the songs emerging success on Tuesday when it was still at number 26 in the chart. Die Welt reported that despite widespread ridicule, the hymn, which contains no words, was selling well.

Since then it has leaped up to overtake Adele’s hit single ‘Hello.’

It has also jumped above successful German recording artists Robin Schulz and Sido, who have been knocked down to places three and four, respectively.

On YouTube the hymn has also clocked up over 100,000 views so far. However, most of the commentaries underneath ridicule it for its banality.

Many comments made fun of the lack of lyrics in the song, connecting it to a common stereotype of Pegida followers being uneducated.

“What do you do if you are writing a hymn for people who aren't very good at speaking German? Correct. YOu replace the lyrics with humming and vowel sounds,” one commentor writes.

The song is clearly something of an opinion divider on Amazon too, with all its reviews being either five star or one. One start currently edges out five star by  443 votes to 352.

That this might have more to do with the politics of the group behind the hymn than the merits of the music is revealed in the comments.

One is titled 'Merkel must go' while another says 'for this money I'd rather buy a Döner' – a reference to Germany's must popular meal from the Muslim world.

Pegida leader Lutz Bachmann thanked the critics on his Facebook page for contributing to the song’s success.

“Thanks to all the comments from the dumb lefties our song is racing up the charts – meaning more sales for us.”