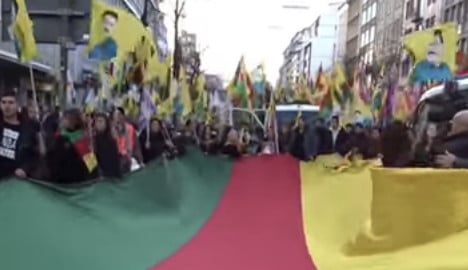 Kurds demonstrating in Dusseldorf on Saturday. Photo: YouTube/ Screen Grab
The marchers, demonstrating on behalf of Germany's federation of Kurdish groups, Nav-Dem, also slammed the European Union for striking a refugee “deal” with Ankara, promising three billion euros in return for holding back refugee flows.
A police spokesman said the turnout at the protest was far higher than the 7,000 people expected by the organisers.
After a ceasefire for more than two years, fighting resumed last summer between Turkish security forces and the PKK, dashing hopes of ending a conflict that has left more than 40,000 people dead since 1984.
Turkish security forces are currently imposing curfews in several towns in the Kurdish-dominated southeast in a bid to root out PKK rebels from urban centres.
The operations mark a new escalation in five months of fighting with the PKK, which initially fought for Kurdish independence but now presses more for greater autonomy and rights for the country's largest ethnic minority.