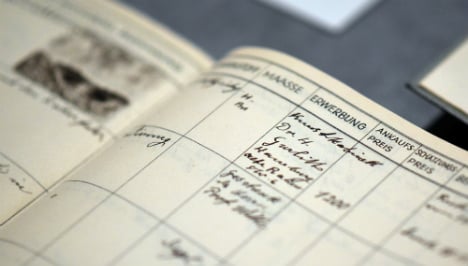 The signature of Hildebrand Gurlitt confirms his purchase of a painting in a record book at the Wallraf-Richartz Museum in Cologne. Photo: DPA

It's a bitter disappointment for many who had hoped that a Matisse painting restored to its rightful owner in May would be the first of many among the roughly 500 pieces to be given back.

With just five pieces clearly identified as Nazi-looted art, the two-year, €1.7-million investigation has been a letdown after the big promises made by Culture Minister Monica Grütters, who had pledged to return stolen art with “no ifs or buts”. A photo of the returned Matisse painting is displayed on a screen. Photo: DPA

Opposition politicians from the Green and Left parties were quick to label the result a “disgrace”.

Meanwhile, Jewish victims' representative Rüdiger Mahlo, of the Claims Conference organization, said that the investigation had not been conducted quickly enough and had disappointed the Holocaust survivors and their descendants.

The taskforce will present its final report in mid-January on the works, some of which can be found at www.lostart.de.

The Gurlitt haul was discovered in a Munich flat in 2012, immediately becoming the subject of a bitter legal battle for ownership that continued after Gurlitt's death in 2014.

He wanted to leave the entire collection of around 500 artworks to the Museum of Fine Art in Bern.

But directors there agreed to leave them in the care of the German government while it investigated which artworks might have been stolen from Jewish families during the Nazi period.

Gurlitt's father Hildebrand acquired most of the paintings in the 1930s and 1940s, when he worked as an art dealer tasked by the Nazis with selling works taken from Jewish families and avant-garde art that the Hitler regime deemed “degenerate” and had seized from German museums.

Gurlitt never married or had children, declaring his art collection to be “the love of his life”.

But with the help of a revolving cast of lawyers and advisors, Gurlitt eventually softened his stance and began cooperating with the German government to reach an agreement that was also welcomed by Jewish groups.