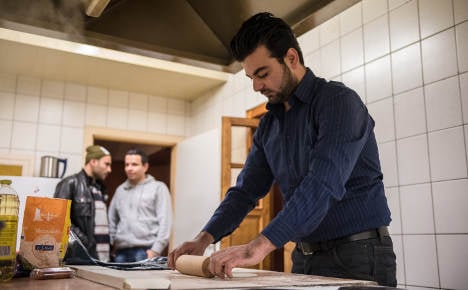 Kawa Suliman at the refugee home in an old restaurant in Zapfendorf. Photo: DPA

Gabriele Stärz and Hans Eppinger regularly travel to Bamberg in northern Bavaria for the outdoor opportunities the region offers.

But as they came back from a canoeing trip in the early autumn, they realized they had overdone it a bit.

“I was absolutely starving,” Stärz told the Fränkischer Tag. “We absolutely had to find a restaurant.”

They wandered through Zapendorf for a while without success until they came across a sign which said ‘Brewery – Restaurant Hennemann’.

They were a little puzzled when they found the doorway bricked up, but a man stretched out the window and pointed to the back.

As the couple entered the building, the first people to receive them found Kawa Suliman, a 30-year-old lawyer from northern Iraq, as he was the only one with good enough German to understand them.

“We had no idea who they were,” Suliman told the Fränkischer Tag. “Nobody knew them, but one thing was clear to me – they were hungry.”

So Suliman showed them to some seats around a table.

Stärz noticed that none of the tables and chairs matched each other.

“I thought. They’ve just opened up. Under such circumstances one should have a bit of understanding when everything doesn’t look too neat,” she said.

Eppinger though wasn’t too happy that the restaurant only served cold food and made to complain, before his better half gave him a sharp jab with her foot under the table.

It was already the afternoon so the ravenous pair ordered what the young man offered them: eggs, toast, homemade jam, homemade flat bread, tomatoes and yoghurt.

Bassam Elshia, Mohammad Ali and Ahmed Abdallal sat at a nearby table as their friend served the unfamiliar guests. But then Suliman called them into the kitchen to explain to them the situation and to ask them to help rustle up some food.

They managed to come up with everything Suliman had offered plus a bit of cheese.

“It was delicious,” Stärz remembers. She drank green tea while partner Hans had milk.

“We only realized it wasn’t a restaurant when we asked for the bill,” she said.

When Eppinger asked why he didn’t have to pay, the situation cleared itself up.

“I immediately began to cry,” Stärz said. “I could start to cry again just thinking about it.”