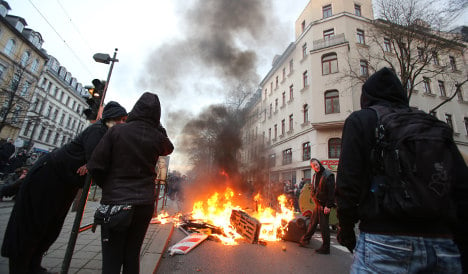 In all, 69 police and several demonstrators were hurt, police said. About 50 police vehicles were also damaged. Security forces also made 23 arrests.

The Leipzig state prosecutor's office is pursuing charges against protesters for breach of the peace, Die Welt reported on Sunday.

“There are also other violations, but mainly it comes down to this charge,” said spokesperson Ricardo Schulz. “There are a number of proceedings against masked people who were throwing stones. This was an excess of violence.”

Police have been able to identify already some of those involved in the violent clashes and the investigation so far is focusing on the left-wing demonstrators.

The protesters from the larger rally clashed with police in several areas of Leipzig, throwing stones, setting off firecrackers, and blocking roads by burning trash. They also attacked firefighters.

“The fact that criminal acts full of destructive rage took place during Advent on a main shopping street and impacted uninvolved families with children while shopping is intolerable,” said Saxony's interior minister Markus Ulbig in a statement.

“Whoever attacked police because they reject our rule of law will feel the consequences in full force.”