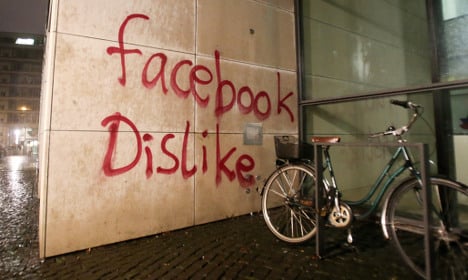 Critics in Germany have charged that Facebook cracks down harder on nudity and sexual content than on hate-mongering. Photo: DPA.

The black-clad, masked vandals hurled rocks, paint and smoke bombs at the building, damaging its walls, front door and windows, in the northern port city of Hamburg around 2000 GMT Saturday.

Police and the domestic security service were searching for the attackers, who fled on foot. The motive for the attack and the financial cost of the property damage were not yet known.

Online privacy campaigners have long criticised Facebook, and the company has also drawn fire in Germany for a spike in racist vitriol carried on the network as the country struggles with a record influx of asylum-seekers.

Critics in Germany have charged that Facebook cracks down harder on nudity and sexual content than on hate-mongering, while Justice Minister Heiko Maas has warned the social network must not “become a funfair for the far-right”.

Facebook has said it would encourage “counter speech” and step up monitoring of xenophobic commentary.