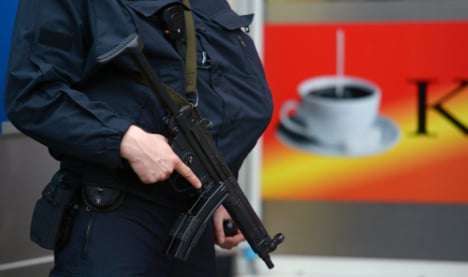 A police officer holding a submachine gun on a Berlin street. Photo: DPA

Named only as Hüseyin D, the man from Dinslaken, in the Ruhr region of North Rhine-Westphalia, is believed to be part of the so-called “Lohberger Brigade” – a group of young men who went to fight alongside Isis jihadists in Syria.

Members of the group were in close contact with Abdelhamid Abaaoud, the supposed organizer of the attacks in Paris that left 130 people dead and hundreds injured after bomb and Kalashnikov attacks across the north and east of the French capital.

In a blog post on the German connection to Isis and the Paris attacks, jihadist monitoring site Erasmus Monitor showed a picture of Hüseyin D. posing with Abaaoud.

Erasmus Monitor reports that the Dinslakener had joined his brother Hasan in Isis' de-facto capital, Raqqa, in Syria at the end of 2014 with a group of eight other men from their hometown.

Hasan was killed in a US airstrike in Kobane in December 2014, while Hüseyin remained close to Abaaoud.

Hüseyin is also the subject of a travel ban from entering Germany, Bayerische Rundfunk reported on December 2nd.

Number one on the list of 16 suspects German police are seeking in connection with the attacks is Salah Abdeslam, who has been on the run since November 13th.