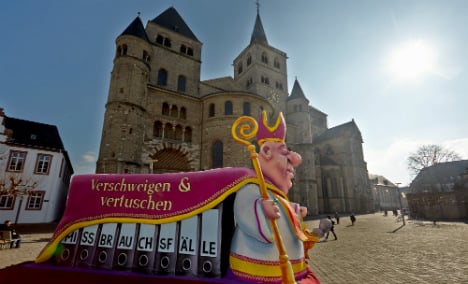 A float set up by protesters outside the German Bishops' Conference at Trier Cathedral. Files labelled "Abuse cases" are hidden under the bishop's cloak. Photo:DPA

“I don't believe that this chapter will ever come to an end,” said Bishop Stephan Ackermann, the man charged with investigating past abuse by the Conference of German Bishops (DBK).

At the beginning of 2010, it began to emerge that priests at an elite Jesuit school in Berlin had sexually assaulted dozens of students in the 1970s and 80s.

The Church admitted that it failed to properly investigate reports of abuse and in some cases even covered them up by sending accused priests elsewhere.

Hundreds of more cases came to light and the Church launched investigations and prevention measures.

People were still coming forward to report sexual crimes by the clergy today, Ackermann explained, although the numbers have fallen away since the scandal broke five years ago.

But Ackermann, who is also Bishop of Trier, explained that for many, it can take a long time before they feel they are able to speak about what happened. Many of the cases date back to the 1950s and 60s.

“Some people report crimes with a very long time delay because only then do they feel the strength to say it,” he said.

The DBK has recommended that around 1,600 victims be paid financial compensation.

And last year Ackermann announced a three-and-a-half-year independent study of abuse in the Church, set to cost around €1 million.

But the bishop is hopeful that things have improved in the Church in recent times, with fewer cases reported relating to the recent past.

“I believe that at present, the danger that this happens is much smaller, because people have become more alert and sensitive,” he said.

But despite the Church's introduction of a set of preventive measures designed to spot abuse, “I don't delude myself that this will never happen again,” Ackermann added.