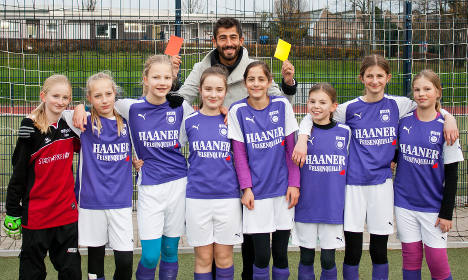 “This is what happens at Fortuna Dusseldorf when a young player makes a mistake,” posted Fortuna on their Facebook page. Photo: DPA

Fortuna Dusseldorf’s Kerem Demirbay had to apologise to German FA (DFB) referee Bibiana Steinhaus for his comments immediately after she sent him off for a second yellow card late in his side’s 2-1 win at FSV Frankfurt last weekend.

The DFB has banned Demirbay for five games, two of which would be suspended, to set an example, but his club lodged an appeal and came up with an unusual punishment of their own.

“This is what happens at Fortuna when a young player makes a mistake,” posted Fortuna on their Facebook page with pictures of Demirbay refereeing a match between two junior girls teams – albeit in his normal clothes.

Demirbay, 22, apologised in person to the 36-year-old Steinhaus, who officiated the 2011 women’s World Cup final when Japan beat the USA in a penalty shoot-out, and also refereed the 2012 Olympic final in London.