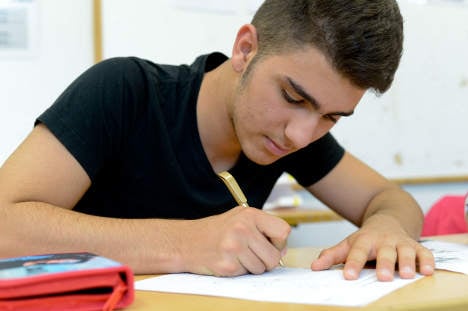 Should children only learn at school? Photo: DPA

Armin Himmelrath didn’t set out to write a book which called into question one of the oldest tenets of western education.

But by the time he had finished his research he was convinced that homework should be abolished.

“I found out that teachers have been giving homework since at least 1480,” Himmelrath, an educational journalist, told The Local.

“And there has also been research into its effects on children for the last 130 years. And in all this research I found no results which showed that it had a positive effect on them.”

On the contrary, if his research showed any overall result, it was that children would go into school the next day unmotivated and reluctant to learn after spending the evening doing homework.

“In the Swiss canton of Schwyz teachers didn’t give out homework at all between 1993 and 1999. Then, due to pressure from conservative parents it was then reintroduced.

“But a comparison with a neighbouring canton showed that there was no difference between the grades in the two cantons during this period.

“The only difference was that in Schwyz the children were much more motivated in class,” Himmelrath related.

“Studies show that the more educated a child’s parents are, the more likely they are to get involved in their child’s homework, either personally or by hiring a tutor,” said Himmelrath. On the other hand children who come from less privileged backgrounds and need to catch up on school work are more likely left to do it by themselves.

“But if I haven’t understood a problem in the school, it doesn’t matter how many times I repeat it by myself at home, I’m still not going to understand it,” the Cologne based writer argued.

Himmelrath’s prescription for the problem is “supervised and professionalized” independent work during school hours.

It should stop being called homework and start being called school work, he said, adding that only with the supervision can children progress with individual learning, by having a trained professional to explain solutions when the student gets stuck.

His suggestions, though, have come up against serious resistance, from parents and teachers alike. While he has written several other books on education “this was the first to provoke a shitstorm,” the journalist said.

“Very many teachers tell me that school wouldn’t work without homework. But when I discuss it further with them 90 percent admit that it’s problematic.

“I tell them: Stop giving it and then you have twenty minutes extra every day,” says Himmelrath.

The biggest resistance though, has come from parents, even though they are co-opted by teachers into threatening their children with punishment if they don’t get the work done.

“Parents seem to think that it shouldn’t change because it was the same when they were young. They say ‘it didn’t do me any harm.’ But that also doesn’t mean it was useful. That was also an argument many people used for corporal punishment.”

The central problem is that children are forced to learn through threat of punishment, Himmelrath said. “When this is the case you know something is very wrong.”

His kids, he says, improved their English by playing interactive computer games over the internet that meant they had to communicate with other players across the world. Others learn better by watching films.

“At home children shouldn’t be forced to work. They should be playing games or having discussions with their parents. This is of much more benefit to them anyway.”