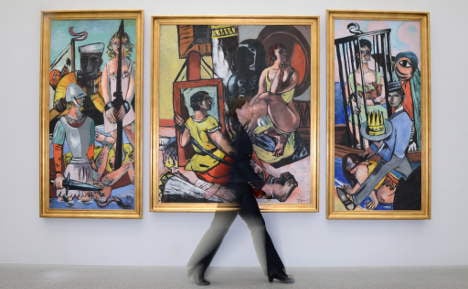 The letter has been signed by 29 Congressmen and urges Seehofer to facilitate a dialogue between the Jewish families who suspect their ancestors had art stolen from them under Nazi rule and the Bavarian state museums, reports Spiegel.

Bavaria had promised to reunite the works of art with their Jewish owners, but to realize this commitment would need “greater dialogue and cooperation” the letter read.

“The importance of these issues to Holocaust survivors and their families worldwide cannot be overstated,” the letter, which had a Washington postage stamp from early November, read.

In perhaps the most high profile example, the Pinakothek der Moderne, the jewel in the crown of Bavaria’s world famous art galleries, is accused of holding nine works which were taken from Jewish art dealer Alfred Flechtheim in the early 1930s.

The works include six paintings by the celebrated expressionist painter Max Beckmann and one by Paul Klee.

The Pinakothek insists the Beckmann collection was sold by Flechtheim in 1932, a year before the Nazis came to power.

At the time, the Bavarian government announced a “relentless investigation into Nazi art theft”. But two years later, only two of the more than 1,000 works found at Gurlitt’s flat have been returned to the heirs of the people they were stolen from.

Flechtheim’s great-nephew Michael Hulton told Spiegel that Americans have come to see the behaviour of the German authorities as “disgusting”.

Brendan Boyle, a Democratic Congressman from Pennsylvania and signatory of the congressional letter, meanwhile described returning the art as “the just and right thing to do”.