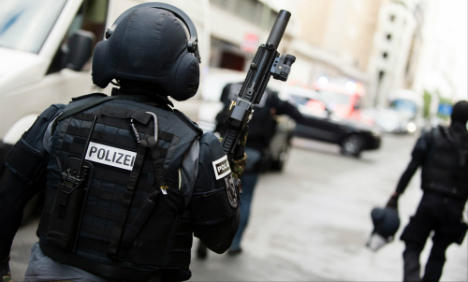 A Berlin SEK (SWAT) officer during a deployment in June 2015. Photo: DPA

Berlin police tweeted at 5:20pm that they had arrested two men in the Britz district south of the city centre.

Police had earlier told The Local that officers on the scene had been investigating a car belonging to one of the suspects which contained a suspicious object.

Officers also searched an Islamic centre in Sophie-Charlotten-Straße in the western district of Charlottenburg, a police spokesman told The Local, but no weapons or dangerous items had been found by the time the raid ended.

Police also tweeted they were still searching the building with sniffer dogs trained to find explosives.

Police said that they launched the raids after receiving clues from members of the public about a “dangerous situation” – but insisted there was no evidence of a plan to attack the German capital.

Security sources told Der Tagesspiegel on Thursday evening that Islamists may have planned an attack outside Berlin in a western German state.

It is not yet known whether there was any connection the Paris terror attacks two weeks ago.

The mosque raided was one of the same ones raided by police in September.

Tip-offs on the rise

Police said that the raids were conducted by members of the city SEK (SWAT), but were unable to confirm reports from Bild that Germany's elite anti-terrorist police unit GSG-9 were involved.

There has been an increasing number of tip-offs to the police in the wake of the terrorist attacks in Paris on November 13th.