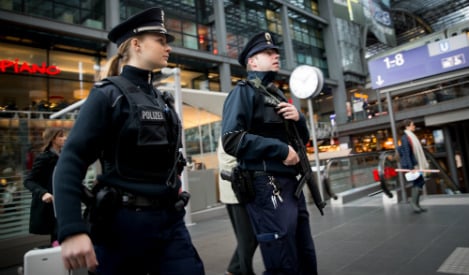 Sahra Wagenknecht, head of die Linke told Tagesspiegel that interior minister Thomas de Maizière was playing with people's emotions after he refused to give details for why Germany's football match with the Netherlands was cancelled shortly before kick-off on Tuesday.

“The interior minister is creating extreme anxiety. He is playing a highly dangerous and to an extent unconstitutional game with the public's fears,” said Wagenknecht.

De Maizière came in for criticism on social media on Wednesday for suggesting that telling the public the details of an alleged terrorist plot against the football match would spread panic. Critics say that leaving the public in the dark is what is causing anxiety.

Berlin-born rapper Deso Dogg – real name Denis Cuspert – is probably still alive, reports Spiegel, after the US Pentagon claimed to have killed him in an attack on Isis stronghold Raqqa in October.

Citing German security sources, Spiegel claims that telephone conversation have emerged in which Cuspert is identified as one of the callers – the conversations took place after the October 16th airstrike which the US said killed him.

The Hamburg-based media outlet described Cuspert as a “leading member of Isis”. But this description is not held by the US Pentagon which said that they had not been specifically targeting Cuspert with the airstrike, not considering him to be a high value target.

16:09 – NRW to step up security at Christmas markets

Police will continue to patrol the streets carrying their normal weapons but will concentrate on “well visited” places such as Christmas markets, Bild reports.

Jäger described the situation as “serious” and said that German speaking jihadists have been calling for attacks on Germany for weeks.

Sweden has raised its terror threat level in response to “concrete information” of a terrorist plot, the Nordic country's Säpo security service said on Wednesday afternoon.

15:16 – Hannover's Christmas market will go ahead

Mayor Stefan Schostok told reporters in Hanover that the city's Christmas market would go ahead as planned.

There is no general threat to large events in Germany, and that's true for Hanover as well, he said.

Turkish police have arrested eight alleged jihadists from Morocco at Istanbul airport as they were headed for Germany.

Press agency Anadolu reported that the men were detained as they arrived from Casablanca.

The suspected Isis members wanted to stay for two days in Istanbul for a “tourist trip” and claimed to have booked a hotel there, but police could not verify their booking with the hotel.

Turkish authorities found documents on one of the men showing that they planned to enter Europe via Greece with Germany as their final destination, the press agency reported.

12:38 – Chancellor Merkel thanks people of Hanover and security services

“I was just as sad to see the Germany-Netherlands game cancelled as millions of fans,” Chancellor Angela Merkel said in a brief statement on Wednesday afternoon.

The Chancellor thanked the people of Hanover and the fans in the stadium for their calm response and respect for the security services' “difficult decision”.

She also had special praise for the security services who, she said, made it possible for Germans to continue to enjoy large public events like football matches despite the terror threat.

Former Interior Minister Gerhart Baum, who was in office during terror by the Red Army Faction (RAF) in the late 1970s and early 1980s, said that the threat of terror from Isis was “much more insidious” than that of the far-left terrorists.

“We knew who the perpetrators were [back then]. People remember the 'Wanted' posters,” Baum told rolling news channel Phoenix.

12:18 – Police raid at high school on Tuesday due to toy gun

Police have confirmed that a major operation on Tuesday at a high school near Stuttgart was a false alarm.

Police found a man at the scene carrying a toy gun. But they said the man – who was under the influence of drugs – had only incidentally been there and was on the way to visit a friend. reports the Süddeutsche Zeitung.

On Tuesday police refused to give further details on the operation which caused panic in the town and made national headlines after a local newspaper reported a possible hostage taking situation.

The incident illustrates the febrile atmosphere throughout the country.

Police have been called into action on several occasions to deal with false alarms, including the arrest of seven people in Aachen western Germany on Tuesday in connection with the Paris terror attacks. All seven were later released without charge.

Berlin senator for the interior Frank Henkel has told Tagesspiegel the threat level in the capital is “high.”

“The threat level continues to remain at a level which we take very seriously. We have every reason to remain vigilant. We advise caution, but we shouldn't let fear take over. If we are too afraid to step outside, then the terrorists have won,” Henkel said.

The Local will cover the Chancellor's remarks live.

11:41 – Germany-Netherlands fans will be reimbursed for tickets

Fans evacuated from the Hanover stadium over the bomb threat on Tuesday will have their money returned, the German Football Federation (DFB) has decided.

The German Police Union (DPolG) has firmly rejected a suggestion from Finance Minister Wolfgang Schäuble that German soldiers should take on some police work.

“We are totally against that. Our Constitution forbids it. Only the police can do the work of the police,” DPolG president Rainer Wendt told The Local.

“The Finance Minister ought to stick to his financial work and supply us better with the resources we need.”

Lower Saxony's interior minister Boris Pistorius said at a press conference on Wednesday that there was no further specific threat against the city of Hanover – or future large public events in Germany – at the moment.

In at sometimes testy exchanges with journalists, he repeated that the authorities would offer no details about the nature of the threat that caused them to cancel the Germany-Netherlands friendly for fear of endangering sources.

State premier Stephan Weil added that he would not be “shrinking back into his snail shell,” but living his ordinary life as a German citizen, despite the elevated terrorism threat level across Europe since Friday's attacks in Paris.

Both Der Spiegel and Bild have reported that the tip about a possible attack came from French intelligence services.

Bavarian interior minister Joachim Herrmann has said that the tip-off came from a foreign intelligence agency.

Reinhard Rauball, interim head of the German Football Association (DFB), told press agency DPA that  “match day will go ahead” in the Bundesliga on Friday, despite security concerns raised by the cancellation of the international friendly between Germany and the Netherlands.

Suggesting that in the future increased security at matches could become the norm, Rauball said “it's my impression that starting today football in Germany in every way has taken a new direction.”

He added that they were “of course considering” added security for the upcoming round of matches.

Speaking to broadcaster ARD, Hans Georg Maaßen, the head of Germany's internal intelligence service (VS), said that Germany is a target for Isis.

“If Isis can hit us, if they can carry out terrorist attacks in Germany they will – that is our greatest concern”, he said.

Maaßen admitted that trying to cope with Isis' new strategy of carrying out sophisticated terror attacks in Europe was “a very big challenge for us”.

But the spy chief said he would “in no way recommend” blanket cancellations of large public events in the near future, claiming that the match in Hanover was cancelled only because of a tip-off which they had to take “very very seriously”.

“No explosives were found nor did we make any arrests,” a police spokesperson said referring to the operation that went on through the night, according to Tagesspiegel.

The police are still on the streets, but with a “much reduced presence”.

Police in Hanover, where a planned Germany-Netherlands friendly football game was cancelled over a bomb threat on Tuesday night, are still patrolling the city in strength as part of the hunt for suspects.”We're on the ground in various areas [of the city],” a police spokeswoman said.

No one has yet been arrested after thousands of fans were evacuated over what Interior Minister Thomas de Maizière on Tuesday called the “bitter decision” to cancel the match.

He added that “part of the answer to the question [of why we evacuated the stadium] would make the public feel unsafe.”

DON'T MISS: Full coverage of the events in Hanover on Tuesday night

Bavarian interior minister Joachim Herrmann confirmed that there had been a tip-off about a possible attack from a foreign intelligence agency.

He had received information on Tuesday that “within the next 48 hours there would or might be an attack on a German sporting event,” he said on Bavarian TV, although he added that “the cancellation also surprised me”.

Meanwhile in Paris, at least two people were killed and several police wounded in a massive police raid on apartments in the northeast of the city.

LIVE at The Local France: 'Two dead' in police raid in northern Paris

Officers are hunting for Abdelhamid Abaaoud, the alleged mastermind of Friday's attack on a stadium, bars, restaurants and a theatre in the French capital which claimed 129 lives.