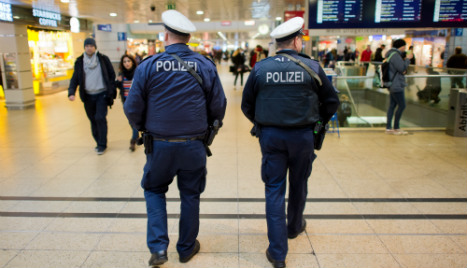 “I'm convinced that Germany is just as much in the sights of the terrorists [as France],” MP Stephan Mayer, security spokesman for Angela Merkel's Christian Democratic Union (CDU) told The Local.

“The claim of responsibility [for the Paris attacks] didn't differentiate between France and other countries.”

But Green Party MP Irene Mihalic said that the threat level in Germany hasn't increased just because an attack took place in France.

“The terrorist threat has not changed. In recent years we've needed to reckon with the possibility of attacks on Germany,” the Green Party Bundestag (Germany parliament) interior policy committee speaker told The Local.

DON'T MISS: What we know about extremism in Germany

She said that concerns about terrorism had been a constant presence in recent years, although so far the only one that came to a real attack was when a Kosovan man killed two US airmen and wounded two others in a gun attack at Frankfurt airport.

The MPs made their comment after John Sawers, former chief of Britain's MI6 spy service, wrote in the Financial Times that “Germany might be vulnerable as Isis would see an attack as weakening Chancellor Angela Merkel and dividing opinion”.

“The Interior Ministry sees Germany as part of an 'international danger zone' – and in principle it has done since the September 11th attacks in 2001,” Michael Bauer, director of the Middle East project at the Applied Politics Centre of the Ludwig Maximilian University in Munich, agreed.

Bauer noted that the security authorities estimate that there are around 700 German citizens who have travelled to fight with Isis in Iraq or Syria – the same profile as the mostly Belgian and French attackers in Paris.

“This ideological system does exist in Germany… these are the people who in certain circumstances could be a danger to us,” he said.

No silver bullet for the authorities

Everyone The Local spoke with agreed that there was little benefit to be drawn from simply reinforcing Germany's intelligence services or rushing in new security powers.

Mihalic of the Green Party pointed out that both France and Germany have introduced sweeping new powers for law enforcement over the past decade – including an extremely stringent French surveillance law passed in the wake of January's attacks in France.

“Despite all that, they didn't manage to spot and fend off these attacks,” she said. “We need to ask whether these instruments are effective and whether they need different capabilities.” A police SEK (SWAT) team in Rhineland-Palatinate, on the border with France, on exercise in August 2015. Photo: DPA

She added that renewed calls by the police for more men, equipment and resources were nothing new – and should be considered on their merits, rather than rushed into.

Germany has already planned to hire 1,000 new federal police officers in both 2016 and 2017 as the refugee crisis has deepened, as well as introducing plans for more internet surveillance, Mayer of the CDU pointed out.

“I don't see what more we can do in legislative terms than we have done in recent months,” he said.

Bauer said that in the long term, authorities should do more to empower Muslims to speak up about and against those spreading extremist ideas in their communities, like schools, sports clubs and religious congregations.

“There's a lot of potential where one could improve prevention” in that area, he said.

“This shouldn't be a culture of snooping but of enlightenment and empowerment, for young people especially.”

While in France and Belgium there have been calls to close mosques believed to be hotbeds of extremism, all the German experts spoken to by The Local were against this idea.

Even if one could correctly identify extremist mosques, closing them would simply disperse fundamentalists rather than stamping out their ideas, Mayer said.

Neither should refugees be shoved as a group into the crosshairs of European security authorities, both MPs stressed. Refugees speaking with a helper in the Bavarian town of Passau, near the Austrian border. Photo: DPA

“Of course there's a danger that the refugee route might be misused by terrorists,” conservative Mayer said, but he added that the vast majority were fleeing Isis and unlikely to be working for it.

ISIS do not represent anyone but ISIS. Not the Arab world. Not Muslims. #ParisAttacks pic.twitter.com/qiWCsEZq7M

While she acknowledged there was definitely a case for better securing Europe's external borders and doing a more thorough job of registering all refugees as they arrived, Green MP Mihalic warned that Europe could not “wall itself off”.

A war of words in Europe over the place of Muslims and refugees in society was undoubtedly one of Isis' aims, the experts we spoke to agreed.

Isis calculates that refugees and European Muslims feeling themselves under general suspicion might become disillusioned potential recruits to their cause, Bauer of LMU said.

But he pointed out that the majority of the attackers were Belgian or French citizens – and that the returning European jihadists likely to carry out attacks in Germany “have German passports and need no refugee status to enter”.

Beyond Europe's borders, Bauer agreed with Foreign Minister Frank-Walter Steinmeier, who sees the best hope of defeating Isis in multinational talks to end the civil war in Syria – something much more complex than simply escalating airstrikes in a knee-jerk response. Depriving Isis of the power vacuum it has exploited in Syria could end its territorial expansion and slash its ability to recruit followers, Bauer said.

But there are many hurdles to overcome before that might happen – whether that's finding common ground with Russia or bringing regional powers to the table.

“Iran and Saudi Arabia, which are fighting proxy wars in the region, have to be brought closer together,” he said, as well as other regional actors like Turkey.

But those talks will take time to bear fruit.

Meanwhile, yet other measures could strike Isis more surely than any bombing campaign.

Sanctions to block the group's ability to raise money by selling oil would hobble Isis better than airstrikes against their dispersed, hard-to-track forces, Bauer argued.

He particularly warned against using the language of war and thereby repeating the mistake leaders made after September 11th of placing the terrorists on a level with Western nations.

“That's their goal, to be seen as an equal opponent. In fact they're just criminals of the most brutal and evil sort,” he said.