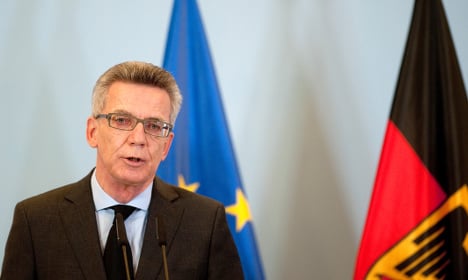 De Maiziere said that navigation systems that were found show “an address in Paris”.

Police had arrested the man on November 5 during a routine check on a motorway, saying “many machine guns, revolvers and explosives” were found in the suspect's vehicle.

Earlier Saturday, state premier Horst Seehofer said that there was “reason to believe” that the suspect was linked to the attackers, and that the case “shows how important it is for us to have some clarity on who is in our country and who is travelling through our country.”

He reiterated his call for reinforced controls at Europe's external borders as well as at each European country's national border.

Alarmed by a record influx of asylum seekers in Germany, Seehofer has been pushing for a halt to Chancellor Angela Merkel's open-door policy for those fleeing war.

Focus Online reported that the arrested suspect was from Montenegro and that he has refused to speak in prison and not hired a lawyer to defend him.

In Podgorica, a Montenegrin police spokeswoman said the 51-year old suspect “is not a Muslim and there is no information that could link him with terrorist attacks in Paris.”

“Montenegrin police was asked several days ago to check and provide information about the Montenegrin citizen who smuggled arms in Germany, but at the time German police has not linked him to radical Islamist organisations,” the spokeswoman Tamara Popovic told AFP.

The police in Montenegro has never registered the suspect as a person of security interest, she added.

France was in a nationwide state of emergency after a night of horror in Paris when gunmen sprayed restaurants with bullets, massacred scores of concert-goers and launched suicide attacks near the national stadium.