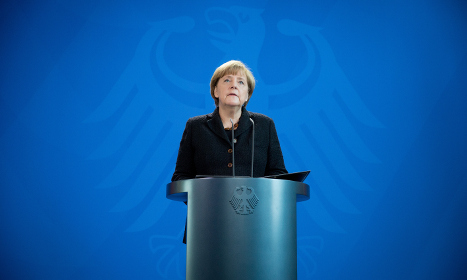 Merkel pledged to help France hunt down the perpetrators of the Paris attacks. Photo: DPA

“We will do everything to help in the hunt for the perpetrators and instigators, and to carry out the fight together against these terrorists,” she said, adding that she will meet with ministers to discuss “the situation in France and all related questions”.

Merkel also said that Germany would help France to hunt down the perpetrators of the Paris attacks and that Berlin would jointly battle the fight against terrorism with France to defend European values.

“The people in Paris are enduring a nightmare of violence, terror and fear,” Merkel said in Berlin. “We, the German friends, we are feeling with them. We are crying with them.”

“This attack on freedom is not only aimed against Paris. It's aimed against us all,” Merkel said, adding that Europe would stand united to defend its values.

“We know that our free life is stronger than terror.”

Gunmen and bombers attacked restaurants, a concert hall and a sports stadium at locations across Paris on Friday, killing at least 120 people in a deadly rampage that President François Hollande called an unprecedented terrorist attack.