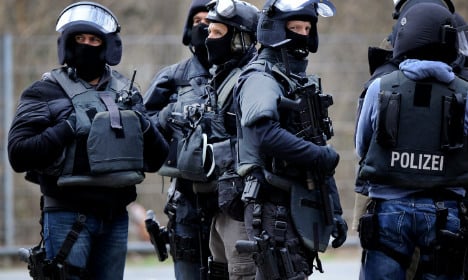 A German police SEK (SWAT) unit in full gear. Police at stations and airports will be more heavily armed in the coming days. Photo: DPA

“The situation is serious,” de Maizière told journalists in Berlin. “We don't know whether the eight attackers we know of were all of them. I will be glad tomorrow if we've had a peaceful night.”

He announced a closer watch on road, rail and air traffic at the German border and heavier arms and armour for police at critical infrastructure like airports and rail stations.

“Before and after the Charlie Hebdo attacks [in Paris in March], I have always said that not just single countries, but the whole West, includng Germany, is in the crosshairs of international terrorism,” de Maizière said.

The Interior Minister also rejected any attempt to link the Paris attacks with the refugee crisis in Germany, as conservative politicians from the Bavarian Christian Social Union (CSU) have already done.

“As federal interior minister and a responsible politician in this country, don't hurriedly create a link to the debate over the refugee issue.

“We have a large number of attacks on asylum seekers and asylum homes. People need to consider their words. They shouldn't put this in any relation to what we are now experiencing in the area of terrorism,” he said.

De Maizière added that a friendly football match between Germany and the Netherlands slated for Thursday in Hanover would go ahead.

He praised the “exemplary” behaviour of Germany's national football team after explosions rocked the Paris area where they were playing a friendly against France on Friday night.

“We have many large events in this country. And we are a country where people move freely and proudly on streets and in public spaces,” he said.

“If we were to fear to hold events, we would be giving the terrorists what they want.”

De Maizière was unable to give any new information on a Montenegran man arrested with a hidden shipment of weapons in his car in Germany several days ago.

The man had “an address in Paris” marked on documents found in the car, De Maizière said, but refused to speculate whether he might be linked to the attackers.