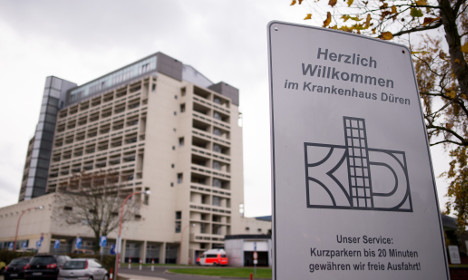 Düren Hospital, where a man was found to be posing as a doctor with forged certificates. Photo: DPA.

The hospital in Düren, North Rhine-Westphalia said on Friday that it had dismissed and reported a man who had faked his credentials as a doctor.

The hospitals reported that local authorities are investigating the man.

After suspicions arose among hospital staff about his doctoral dissertation, the hospital found that he had falsified not only his doctoral certificate, but also his license to practice medicine.

The man had been as an assistant at the hospital and according to the Aachener Zeitung had worked for years in general surgery. But the hospital insisted that he had never performed a surgery without the supervision of someone else.

He had also never made a diagnosis or led therapy, according to Aachener Zeitung.

The hospital went to the local government to check the authenticity of his license, which led the state examinations office to discover that though he had studied medicine, he had apparently never completed his exams. Furthermore, the documentation he had submitted to get his license appeared to be forged.

“We hired the man on the basis of having a good reputation at the clinic where he worked before,” the hospital wrote in a statement. “His license to practice was checked and confirmed by the regional government, as usual before hiring. We had no reason to doubt his qualifications.

“We are very happy that we after observing evidence of a possibly falsified doctor's title, we thoroughly investigated the worker's CV and therefore could uncover the extent of this case.”

According to Aachener Zeitung, the same hospital previously discovered in 2012 that a doctor in their urology department had no permit.

In July, a man was sentenced by a Regensburg court to four years in jail for performing plastic surgery with fake medical certificates.
Another man last year was sentenced in Hanover to more than two years in prison for treating children with life-threatening illnesses – all the while without so much as a high school diploma.