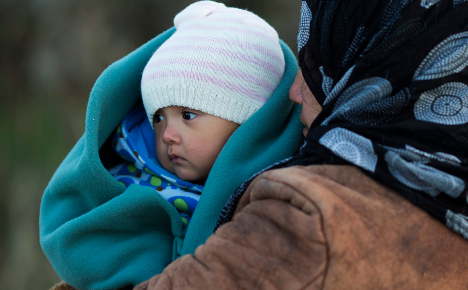 A refugee with her child in Serbia. Photo: DPA

Interior Minister Thomas de Maizière, a senior figure in the conservative Christian Democratic Union (CDU), unexpectedly announced on Saturday that Syrians would no longer be awarded three years' residency in Germany and that they could no longer bring their families with them at a later point.

But it quickly became clear that De Maizière's comments did not have the backing of more senior figures in the government. On Sunday Peter Altmaier (CDU), Angela Merkel's Chief of Staff, said that the asylum process for Syrian refugees would not be changed and confirmed that he had had no idea about De Maizière's change of course.

Merkel publicly stripped De Maizière of overall control of the refugee crisis in October and handed it to Altmaier.

However, other senior figures in the conservative CDU have come out in support of the besieged interior minister, including influential Finance Minister Wolfgang Schäuble. The finance minister's support indicates an ever increasing fracture in Germany's dominant political party over what is fast becoming the most controversial government policy during Merkel's decade in power.

“Of course we have to limit the ability to take family over, because we're at the limit of our capabilities,“ Schäuble told broadcaster ARD.

“I consider it to be a vital decision and I'm a strongly in favour of coming to a quick agreement on this in the coalition.“

But Sigmar Gabriel, head of the coalition's other member, the centre-left Social Democratic Party (SPD), accused De Maizière of announcing a policy that had not been agreed upon by the government.

“We agreed the opposite to what he is saying – nobody can expect the SPD to publicly say yes or no to some policy which was announced 24 hours earlier,“ Gabriel told broadcaster ARD.

A senior politician in the Green Party accused the interior minister of attempting to overthrow the government with his unexpected policy announcement.

“Chaos rules in the CDU at the moment,” Robert Habeck, deputy leader of the Green Party in Schleswig-Holstein, told the Rheinische Post.

“That is a putsch. It needs to be clear who is the cook and who is the waiter,” he added.

Germany announced last week that it had already received over 700,000 asylum applications in 2015, as migrants flood into the country seeking protection from war and a better future.

Germany's generous policies towards refugees have met with growing public unrest, as violence against refugee centres has hit an all-time high, and anti-refugee protests have drawn thousands onto the streets of some cities.