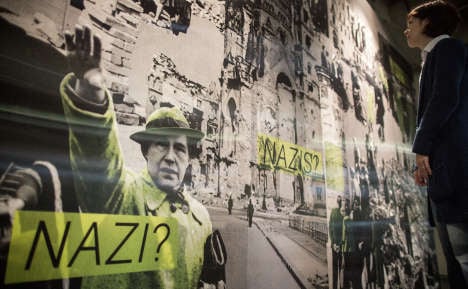 Who was a Nazi? An exhibition at the Allies Museum in Berlin. Photo: DPA

The research, carried out by the Centre for Contemporary Historical Studies with the blessing of the Interior Ministry, shows that the number of ex-Nazi party members in both the West and East German post-war administrations was much higher than previously thought.

In exact figures, an average of 54 percent of civil servants in the West German interior ministry were former Nazis, although at its high point between 1966 and 1961, two-thirds of all employees at the ministry had been Nazi party members during the war.

To have been a member of the Nazi party “was not seen as a bad thing in 1949,” Dr. Frank Bösch, the lead researcher on the project told The Local. “There was a belief that they were people who had done their duty in a difficult time.”

Bösch said the policy was more one of toleration than active encouragement. West Germany decided it needed expertise in managing its bureaucracy and only hired people with a legal education, meaning they often had little choice but to offer ex-Nazis positions.

The number of ex-members of Hitler's personal militia, the SA, was also surprisingly high, the report found, reaching a peak of 45 percent in 1961.

The number of ex-SS members meanwhile was between five and eight percent of interior ministry employees.

The fact that 14 percent of employees in the East German interior ministry were ex-Nazis also came as a surprise to the researchers as the communist state had at the time made a big deal of its stringent denazification process.

A consequence of the West German policy was that many of the people responsible for running the country still held onto very reactionary views.

In one instance, a judge tried to have Jews who returned to the country from Israel deported by categorizing them as illegal immigrants. The attempt eventually failed – although four people were deported – due to government fear of how such a policy would be seen in the outside world, said Bösch.

It was only in the 1960s that people started losing their jobs because of their Nazi past, although they did manage to moderate their more extreme ideas in the face of public and especially media pressure, argued the historian.

Bösch explained that 1945 did create a genuine break with the Nazi past. Many of the elite were put into Allied prison camps where they learned about democratic values. They later adopted these values either because they believed in them or because it benefited their careers.

“But it takes much longer for the world to change,” he said.

The researchers will now look further into the past of the Nazi members who worked at the interior ministries to understand what exactly they did during the Nazi period.

“Membership of the Nazi party in itself doesn't say that much,” said Dr. Andreas Wirsching, one of two researchers working on the study. “We want to know what the employees of the two German interior ministries did during the Nazi period.”